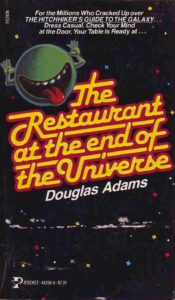 When it comes to books, I’m largely a fantasy-oriented guy. I haven’t read too many science-fiction books but Douglas Adam’s comic sci-fi series, Hitchhiker’s Guide to the Galaxy, seems more a parody of science-fiction as a literary genre than science-fiction itself.

I read the first book of the series, Hitchhiker’s Guide to the Galaxy, a year or so ago. I remember finishing it in one sitting, clocking two-three hours. I found it incredibly entertaining and one of the only books which actually made me laugh at the top of my voice. Guffaw. Belly-laugh, as it is called.

Simply put, Hitchhiker’s Guide to the Galaxy is related in the same way to science-fiction as Discworld is related to fantasy. Both Douglas Adams and Terry Pratchett aim to mock their respective genres. But there is one distinguishing factor: Discworld is confined to its genre—fantasy and lampoons many notable fantasy writers and plot-devices. Hitchhiker’s Guide to the Galaxy, on the other hand, goes well beyond science-fiction and insidiously creeps up in your everyday life.

The premise is pretty simple. Arthur is an earthling—inhabitant of the planet earth. One day the earth is demolished, but Arthur is saved by his friend, the alien Ford Prefect, who Arthur had assumed to be an Earthman like him. They hitchhike on the spaceship of a belligerent species called Vogons (who, as a matter of fact, are responsible for earth’s destruction). From there, Arthur and Ford Prefect join two other protagonists—two-headed Zaphod Beeblebrox, who is an alien, and half-cousin to Ford, and Trilian, an earthling like Arthur. Marvin, an intelligent and despondent robot, completes the list. Then begins one of the most exhilarating vicarious adventures you will ever experience. The protagonists travel across the galaxy, sojourn weird planets, meet weird and oft-times, dangerous people.

Adams derives gags from the most mundane, trite facets of life. His humour doesn’t appear to be forced. It is as though the humour is integral to the story, and the book wouldn’t have any sort of existence without all the fun. Even Marvin, the robot with always-gloomy disposition, manages to be funny.

Bottom-line: If you have even a whit of a sense of humour in your heart and if you can laugh at yourself, this world, this galaxy and even this universe, you can’t possibly go wrong with this one. I’m not at all exaggerating when I say this is the by far the funniest book I have read in my life.