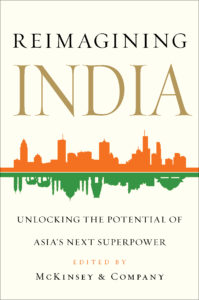 India, today, is no more just a land of elephants and snake charmers. It is no more a nation struggling to make its democracy work. No more does an Indian feels shy from expressing his/her patriotism and no more does the world wait for India to shine. For India has arrived, and it has arrived with much elegance and panache. India today, is the India which every global citizen dreams of living in. India today, shares a growth story which every nation wants to have a piece of. But then, as Indians, how do we imagine this new nation? How do we place ourselves as the citizens of a global nation?

The key to the answers to all the above-mentioned questions is beautifully described in the book “Reimagining India” which is compiled and edited by the McKinsey & Company. The book deals with various aspects of the new India, right from what a reimagined India should be like, to what is and what should be its current state and future state of politics and policies, from businesses and technologies to the unprecedented challenges which face the rise of this modern yet traditionally rooted nation. The book also captures the essence of India and its culture, the soft power of Bollywood, cricket, Indian cuisine and various other elements that make up this 5000-year-old nation and which differentiates it from all other nations. Last but not the least, the book also stresses on India and its position in the world. It not only talks about where India should be a hundred or a fifty years from hence but also what needs to be done to make India reach what is rightly its correct place in the world i.e. a global superpower.

Reimagining India takes shape in the form of essays by noted people from all walks of life, people who hail from both national and international circles and whose interests and passion covers a wide array of topics from politics to policies, from business to arts, from technology to strategy, from Bollywood to cricket. From an aggregate point of view, this book seems like a potpourri of opinions from people who are nothing but beautiful and inseparable pieces of a kaleidoscopic vision.

Reimagining India makes an interesting read for those who have a general interest in the vision of our nation. The book though quite insightful seems a little boring in the middle when some of the essays become more idealist than pragmatic. Also, some contributors, as it felt while going through their work, seemed to be more interested in writing these essays as a promotional piece for their products/services rather than in giving an honest opinion about a reimagined India.

That being said, there are sure a number of essays to look forward to, and these especially include the ones contributed by Bill Gates, Ruchir Sharma, Yasheng Huang, Eric Schmidt, John Chambers, Nandan Nilekani, Sukumar Ranganathan, Ramachandra Guha, Jerry Pinto, Suhel Seth, Kumar Mangalam Birla and Suketu Mehta. My personal favourites among all listed above are “The Village People” by Suketu Mehta, “What I learned in War (On Polio)” by Bill Gates and last but again not the least “Bollywood: Inside the Dream Machine” by Jerry Pinto. I strongly recommend reading of at least these three exceptional and inspiring pieces of work, if not the complete Reimagining India.