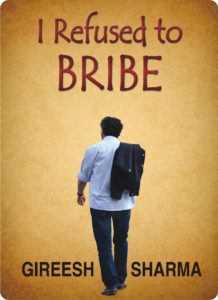 “And you shall take no bribe, for a bribe blinds the clear-sighted and subverts the cause of those who are right.”

Have you ever given a bribe, no matter however small? I have; to cops, to municipal clerks, to revenue officials, and many more. I know it is wrong, in fact a sin, but I have committed it. Bribery is so deeply rooted in our society and its functioning that it has become imperative to grease palms to get a work done. But not everyone is like that. There are people who have faith in the system; they will fight the system but not commit the sin of bribery. I Refused to Bribe is the story of one such morally upright man, Jitesh Kumar.

I Refused to Bribe is based on Jitesh an employee in the State Bank of India, is falsely accused in a forgery case and is duly suspended from his duties, pending investigation. His role in the fraud is investigated by the vigilance department, local police and then the CID. During the ongoing investigation, he comes face-to-face with the evils of bribery, when at each step of the investigation, the investigating officers demand a bribe to speed up the procedure. But being the man he is, Jitesh readily accepts his deteriorating finances, social boycott and a family troubles but refuses to bribe. Will Jitesh’s faith in the system be futile? Will the bureaucracy eat up the life of another innocent man? Will Jitesh succumb to the convenience of bribery?

“Jitesh held Maya’s hand and embraced his children. He raised his head up, looking at the open and wide sky. “I refuse to bribe!” he said emphatically as his face glowed with an air of conviction.”

I Refused to Bribe is written in a timeline style beginning in 1950 and gives a detailed account of Jitesh’s family background – his parents, childhood, education, marriage and his professional life. These narrations are interspersed with important historical events like the post-independence chaos, Nehru’s death, Indira Gandhi’s tenure, the emergency etc. The reasons behind the drastic rise in corruption, the failure of the bureaucratic machinery and the pathetic conditions of the government departments are well elucidated. The alarming similarities between 1950s’ India and the India of 21st century cannot be ignored; even after 60+ years of freedom, India, at its core, hasn’t changed much.

There has been a dearth of books on the subject and Gireesh’s book comes as a refreshing change from the college romances and teenage troubles we read a lot these days. The language and the writing style are not flawless and smooth, and coupled with the many editing mistakes, makes the reading a bit tough. Certain narrations have unnecessarily crept up in many places which disrupt the pace and structure of the plot.

Other than these minor negatives, the book is a surprise package of an amazing subject, a well thought of plot and nicely built characters. A must-have in your bookshelf.