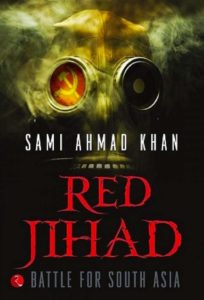 The plot of the book Red Jihad is about a terror strike against India which is planned India on Indian soil (This must seem familiar if you’ve read Aroon Raman’s “The Shadow Throne”). India is developing a futuristic ICB missile technology, Pralay, at a secret base in the Andaman Islands. The base is overtaken by a group of Jihadists and Naxals, who have joined forces. Their mission – “To use this missile against India”. The Prime Minister of India, Bipolab Roy, orders a hit on the base to flush out the militants and minimise damage but the Chief of army staff, General Malhotra, opposes it, predicting huge loss of life. When the Prime Minister remains adamant about the mission, the army, under Malhotra, overthrows the civilian government and imposes military rule and that too with one day’s planning. Ridiculous. The mission is finally carried out and the militants are killed but they have already launched the missile and the target is expected to be Delhi. The rest of the plot is about how the perpetrators are caught and punished.

The major positive thing about Red Jihad is that it is well researched. The names of governmental & inter-governmental organisations, defence divisions, weapons, fighter aircraft etc. are all authentic. The war strategies – land, air & sea – are very brilliant and practical. No Scarecrow stuff.

There are two vital negative things which I would like to mention. One, there are innumerable sub-plots in the book and most of them lack substance. The story is way too fast and before you get a feel of the present sub-plot you are suddenly transferred to another. A little slower pace and little fewer subplots would have made this book very interesting and a great read. Two, there are no strong characters in the book. All the characters have only a minor role to play and the plot lacks a central character. I am still unable to understand why certain characters appear in the plot. They have no role whatsoever.

The climax of Red Jihad is good but again with certain flaws. I was astonished and spellbound when the identity of the main perpetrator, Yasser Basheer, is revealed in the end. The part where an Indian army captain and a Pakistani army captain meet and quarrel over Manchester United & Liverpool was absolutely ridiculous and out of place. The naval strategies in the climax were brilliant and very intriguing.

The language is easy and the book can be read in no time. If you don’t mind the obscene pace of the book and the lack of a strong central character, you can definitely buy this and finish it in 5 hours. Read the book to know –

“Why have the militants captured the base?”

“Who is the mastermind behind this attack?”

“Does Pakistan army play a role in this?”