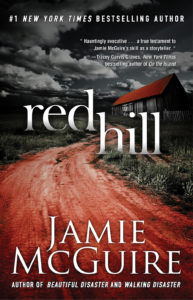 Sometime back in the year 2013, I had read a book– Zombiestan, and as the name suggests it indeed is a work of zombie fiction. Then, after a while, we at bookgeeks reviewed two other books from the author Mainak Dhar in the same genre – Alice in Deadland and Through the Killing Glass. And though, all three were great books, when it comes to apocalyptic fiction, I just can’t get enough of it. At the end of each movie, each book, I crave for more. Thus, it was obviously the same when I finished Red Hill by international bestselling author Jamie McGuire because he writes beautifully and with finesse.

The story comes alive from three viewpoints – Scarlet, Nathan and Miranda. All three, along with some others, form the central pool of characters in Red Hill. Scarlet works in a hospital and at the time of the pandemic breakout is also working her shift out. When the news reaches her, she races hurriedly in the direction of her husband’s home, as her beloved daughters Jenna and Halle are there with her husband spending their weekend time with their father. Nathan is a guy with an almost broken marriage who at the time of the breakout also finds himself at his daughter’s school to rescue his baby Zoe, a cherubic 77-year-old

Miranda, a third character is along with her friends and on her way to her dad’s Red Hill Ranch, who along with his girlfriend Leah is awaiting the arrival of his two beloved daughters Miranda and Ashley. In her shiny new VW Bug, Miranda is not alone but accompanied by her boyfriend Bryce, her sister Ashley and Ashley’s boyfriend Cooper. It is on their way to the ranch, that they come across the news of the breakout. How fate will bring them all together, and how or who it will choose to let die, will only be known by reading this brilliant piece of fiction.

In addition to the characters mentioned above, there are also many other characters who will intrigue you, move you and make you love them. Some which seem important will soon be dead and some which seem non-relevant will become the ultimate survivors. What I liked about Red Hill is that even with the plethora of characters and a number of sub plots, the book at no time feels confusing or complicating. In fact, it is just the opposite as one after the other all the pieces start fitting together almost effortlessly. Although the book has a lot of coincidences for my taste, it is more than compensated by the extremely unpredictable climax. I could not, till the last few pages, have guessed that the actual survivors were others than who I had imagined them to be, right till the end.

Throughout the book, I had a nudging feeling that this book seems very similar to the TV series The Walking Dead, and when I was reading an article where it said that the author was actually inspired by the serial, I knew that I was thinking correct. For those of you, who may have seen The Walking Dead series, the Red Hill may seem a little repetitive but nevertheless, for others, it would definitely be the book to read.