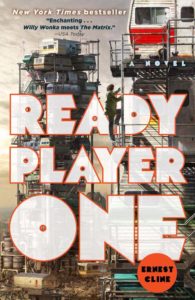 There is nothing quite as irksome as a promising book that fails to deliver. Despite its potential, Ernest Cline’s poorly executed science fiction/fantasy debut “Ready Player One” has too many glaring deficiencies.

The two non-negotiable elements in producing top-notch fantasy are imagination and intensity. Cline’s imagination is fantastic, as is the world he has built. Set in a dystopian future, millionaire tech-whiz Halliday (who is blasphemously compared to Willy Wonka) creates a virtual society-cum-game called the OASIS that turns into the opiate of millions of disillusioned Earthlings. When Halliday dies leaving behind no heirs, his will reveals that his empire will go to the player who can uncover an Easter egg hidden within the OASIS. Years go by and unsuccessful gamers, from the earnest to the deceitful, gradually lose interest in what is, in true sour grape fashion, suspected to be a practical joke; until an uncool, unloved, underprivileged geek (cliché alert #1) has a convenient epiphany (cliché alert #2) and stumbles across the first key. Also thrown in are an out-of-his-league love interest (cliché alert #3) and an evil corporation that is hot on his heels (cliché alert #4).

Although virtual reality’s novelty died with Jonny Quest, Cline’s recycles it to create an environment that is refreshingly new, scoring full marks for plot and premise. Sadly, the pluses end there.

The writing has no punch and is so pedestrian that, despite the impressive plot, it’s hard to be hooked. Every game is explained in excruciating detail. I suspect that Cline was trying to reach out to non-gaming readers but, as someone who hasn’t played a single game mentioned in the book save for Pac-Man, I found the long-winded descriptions tiresome.

There was also a rash of superfluous ’80s pop-culture references – pointless name-dropping which almost never bore any significance to the story. I wish Cline had instead focused on building his story because “Ready Player One” had so much potential to be something amazing. Instead, it comes across as an off-key “these are a few of my favourite things”.

Because the pace is so slow, it takes much endurance to plough through, and the intervals between the quests are agonising. Regardless of how much you might love sci-fi or videogames, unless you have a connection with the ’80s, skip this – it is more infuriating than enthralling.