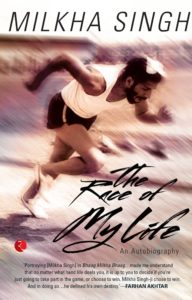 We all have heard of the Sikh that doesn’t run but fly. “The Flying Sikh” and “Bhaag Milkha Bhaag” are phrases that almost every Indian is familiar with. Rakeysh Omprakash Mehra has truly, and in every sense of the word, immortalized Milkha Singh and his chapter in the history of Indian sports. But little does one know that the title “Bhaag Milkha Bhaag” from the movie, had little do with winning of an international race, but with the fight for life rescued from the dark hands of communal carnage which had taken its toll on an entire village, and in this case someone’s entire world.

The book starts with a short chapter on the frugal life of a villager Sampuran Singh, who lived his life in the peaceful and happy company of his wife Chawali Kaur, his daughters, his sons and always-happy-to-help neighbours. All went well until the partition befell India, and the land which always spoke of brotherhood and harmony, suddenly transformed into the playground of communal extremists. Hindus, Sikhs, Muslims, nobody was spared. The hatred resulted in mass bloodshed in which thousands, including Milkha’s family, were annihilated. “Bhaag Milkha Bhaag”, the words of Milkha’s father urging him to run away from the mass massacre were forever embedded in the young Milkha’s memory.

With the relief of finding his brother’s whereabouts in Multan, Milkha left for Delhi where he also found his sister Ishtar and took refuge in her in-laws’ home. It was in Delhi that Milkha fell into bad company and had to go to jail too. He must have been wise to realize his folly so soon and urge his brother to look for a job in the army. Soon, the search was over and he landed up with a job in the army. It was at his first posting in Secunderabad that Milkha discovered his passion for running. And it was from his first race here that the future running hero never looked back.

The book is written in a candid way, and chronologically details all major life events of ‘The Flying Sikh’, with great focus on his sports career. It also talks about his childhood, early life in Delhi, first acquaintance and then romance with would-be-wife Nimmi. There is a generous dose of humour interspersed in the narrations of different events, like when his poor ignorant friend has a hard first time using a lift. There were also lot many incidents where you cannot help but wonder at those moments of pride which this “running legend” had made Indians experience. Also, I felt quite touched when the Japanese hotel staff girls gave Milkha and his friends a farewell gift. The only thing which intrigued me in the whole book was the near zero mention of the 1964 Tokyo Olympics and the fact that Milkha Singh ran only the 4X400m relay when he had initially entered to participate in the 400m and 4x100m relay as well. But barring this, all in all, it is a beautiful book full of life and emotions and will be a great source of inspiration to every athlete who reads it. We do want more Milkhas in the future now, don’t we?