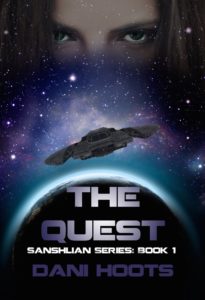 The Quest by Dani Hoots is the first part in the Sanshlian series and is the story of a young girl Arcadia who lives on the planet Garvner along with her brother Rik and her dad. One day when she is only six years old, war breaks out and reaches their little town. Her dad is shot dead and she is abducted by the enemy forces. Away from her home planet, she is sent to a place called Kamps which is infamously known as a testing ground for various drugs that the empire is developing to turn the vast number of orphan children into mindless slaves who will then be trained to do the empire’s dirty bidding.

Luckily Arcadia gets discovered by the emperor Neil who finds something interesting in her and rescues her from the Kamp. He soon inducts her as his personal shadow – the most cunning and most lethal of all his generals; trained to never fail a single mission. Arcadia enjoys this freedom and is okay with her life until one day she comes across her brother Rik. Rik, who she thought to have been long dead and Rik is now part of the enemy and who is now here wanting something from her.

So what will Arcadia do? What does Rik want? Will she help her brother or will she defend the empire and remain loyal to her rescuer Neil? And what about her secret and complicated love interest Jack? What role will he have to play in all this? To know this and much more about the wonderful world of Arcadia and the war of the planets, read this interesting book today!

The Quest has an interesting plot and the story mostly revolves around Arcadia and the mission to discover the allegedly mythical planet Sanshli. The plot is strongly woven and leaves little space for further improvisation. The characters too are very charming and impressive. I simply loved Arcadia, Jack, David, Neil, and even Will. Arcadia undoubtedly is the strongest character and she takes the limelight away from all the other characters. I liked the fact that the story is based on a legend – the legend of Sanshli and Nygard. This makes it all the more intriguing and page turning. All throughout the book, I never had a dull moment wanting me to keep the book down and take a small break. It was simply that amazing.

The book is full of fast paced action, adventure, fun and a little bit of drama. Unlike many other fantasy novels which complicate things by introducing huge number of plots, characters, facts and what not and confuse the readers to no extent, this book did a very good job of making the reader feel at ease. The way things were kept easy and retainable for the readers was really commendable. I liked the climax part too for it kept me amused for a long while and now I am desperately waiting to know what happened to Rik.

My only qualm with the book was that there were no maps or diagrams to help the reader place the planets and the parts of major cities geographically. Had there been so, the book reading would have been a flawless experience for me. But that is just a small thing considering the total package. The Quest appealed to me overall and I would therefore rate it four out of five stars while recommending it to all fantasy lovers.

Book Review Dani Hoots The Quest
by Sankalpita
Leave a Comment
Prev: Maybe This or Maybe That | Abhaidev | Book Review
Next: Girl World: How to Ditch the Drama and Find Your Inner Amazing | Patricia Ottaviano | Book Review