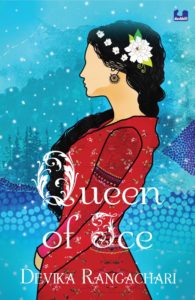 Queen of Ice by Devika Rangachari is a book based on the real story of a 10th century Kashmiri Queen. She finds mention in the famous “Rajatarangini” written by Kalhana.

“Didda” as she was known to one and all was born into the ancient kingdom of Lohara as a daughter to the King Simharaja.

But she was never doted upon by her father because one – she was a girl child and second – she was born lame. The only reason she was allowed to live was a prophecy by the King’s astrologer foretelling of the greatness that she was destined for.

Queen Didda thus passed her childhood in the love and care of her mother and the warm companionship of her two friends Valga and Naravanhana.

Having grown up into a beautiful young woman, she gets married off at a tender age of sixteen to the King of Kashmir Kshemagupta. But being the second wife to the queen does not deter her from fulfilling her destiny.

After the death of her husband, she soon takes charge of the ill-administered kingdom by ruling the kingdom as the regent, a position which she gets as the mother of the child king Abhimanyu.

But as fate would have it, one after the other her all her sons and grandsons ends up dead and in the end, she takes the full charge of the kingdom of Kashmir.

The book is a most pleasurable read and beautifully combines history with fiction. Though most characters and settings have historical roots, certain characters have been developed from very faint of absolutely no mention in history.

This is most prominent in the case of Valga, the Queen’s friend and porter-woman. I came to learn during the little background reading that I did, that the character of Valga was developed from a single sentence mention of the same in one of the ancient texts.

Both Valga and Naravahana comes across as strong characters in the book. In fact, such is Valga’s importance that the story is narrated from Valga’s and Didda’s point of view alternatively with alternative chapters narrated by them taking the story forward in the most effortless way.

Devika’s Queen of Ice is an absolute charm and I really appreciate the fact that Devika through her book, has brought to the forefront the story of an otherwise long-forgotten important aspect of our history.

The book is beautifully complemented by its extremely appealing cover and an equally enticing blurb. The ice blue background and the superimposing illustration of the poised Queen help little to resist the charms of the book.

The author too writes beautifully and creatively.

Thus, needless to say, the book as highly recommended to all my readers and I give the book four out of five stars.