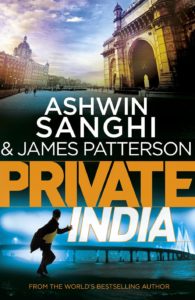 It is a dream collaboration – James Patterson and Ashwin Sanghi. One is a master of crime writing, and the other is a master in weaving mystery.

It is just another ordinary crime thriller which wouldn’t have been read if it did not have the famous names on its cover. In “Private India”, James Patterson brings the famous Jack Morgan of the “Private” series to Mumbai, India.

The book opens with the murder of a Thai doctor in Mumbai. Her dead body has a yellow cotton scarf around its neck. Her hands are wrapped with string. A flower is bound to one hand, a fork to another and a small Viking helmet is tied to her toes.

Eight similar murders, of seemingly unrelated people, take place. The only connection is the yellow cotton scarf around the neck and the trinkets tied to the corpses’ hands and legs.

Facing a manpower crunch, Mumbai police hands over the case to Private, and solving these murders is the job of Santosh Wagh, the head of Private’s Indian arm.

Having lost his family in a driving accident and holding himself responsible, Santosh is a tormented soul torn between job and drink. He has to fight his own past and unravel the mystery because the killer’s identity is linked to an impending terror attack on Mumbai, and Santosh has to prevent it at all costs.

Can Santosh connect the dots and solve the murders?

“The name Kushmanda is derived from two separate Sanskrit words,” Jack read out, “kushma, which means warmth; and anda, which refers to the cosmic egg. So Kushmanda is considered to be the creator of the egg-shaped universe.”

“Elina Xavier was left on her bed with a dozen eggs placed in an oval pattern around her,” Nisha confirmed.

Along the story we get a peek into Ashwin Sanghi’s knack of mythology with subjects as varied as the medieval ‘Thuggee’ and the nine avatars of Goddess Durga.

Patterson’s nifty storytelling is quite evident too. The characters are well portrayed and diverse – a Bollywood star, a singing sensation, an underworld don, a wily bureaucrat, an immoral godman, a corrupt cop.

When two people collaborate for anything, be it a marriage or a business or even for writing a book, they have to be in sync; they have to bring their best to the arrangement.

“Private India” lacked this in many aspects. Mythology, Sanghi’s forte, was irrelevant in many places. Patterson’s gruesome murders and crime scenes were absent. And the climax seemed a bit stretched.

In conclusion, this is a combination which cannot and should not be missed. Leave out your expectations, and read this book like you would read a debut author’s novel.

Your Turn: What do you have to say about the collaboration between Ashwin Sanghi and James Patterson? Do let us know in the comments.