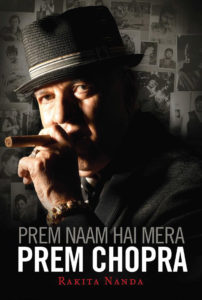 Bollywood and cricket make up the major source of entertainment for Indians. We worship our cricketers and movie stars. We love gossiping about them, reading about them, and prodding into their personal lives. So when an actor or a cricketer writes a biography, it is all but decided that people will lap it up. But the catch is that people expect them to dole out gossips and secrets in large measures. These biographies ought to give their readers an insight into the private lives of their favourite stars. But again, there are a few personalities whose stories inspire you to dream big and encourage you to think beyond the achievable.

In “Prem Naam Hai Mera, Prem Chopra”, Rakita Nanda, Prem Chopra’s daughter, combines both of these elements beautifully by doling out a decent number of insider gossip, and at the same time narrating the story of a man, who became what he is today, through sheer determination and unwavering dedication.

Prem Chopra shone into the limelight for his famous one-liner – “Prem Naam Hai Mera, Prem Chopra”, in the movie Bobby. Since then, he has evolved into one of the most famous villains of Bollywood; a person who we all love to hate. But his story of scaling the pinnacle of stardom is not because of his family background, neither because of a supporting godfather nor because of some powerful friends. It is purely the result of his single-minded focus on his goal and his never-say-die attitude.

The book also lends out many interesting gossips, trivia and minutiae about the stars of yesteryear; the Kapoors, Manoj Kumar, Rajesh Khanna, Dilip Kumar, Dharmendra, Amitabh Bachchan, Dev Anand, Jitendra etc. The evolution of portrayal of a villain throughout the decades, the whims and fancies of various lead actors, the rise and fall of various superstars, and the birth of a new generation of heroes and villains in the 80s and 90s is narrated in detail. The book is interspersed with interviews with many famous names in which they talk about Prem Chopra as a man, and their working & personal relation with him. His experience working with Times of India, his tryst with the Punjabi film industry, the hurdles he faced to get an entry into Bollywood, and the lucky moment which changed his life forever is elucidated. We also get to know about his family life, his circle of friends within the industry, his obsession with caps, and the characters he enjoyed playing most.

Though the book is written by Rakita, Chopra’s daughter, it is narrated in the first person by Chopra. The language is sincere, and the narration direct and candid. Chopra does not shy away from enumerating his negatives or the scandals surrounding his bad-boy image.

There are many takeaways one can expect from this story of a simple middle-class boy who succeeded in an industry which is known for its nepotism, favouritism and preferential-ism. I definitely recommend this light and entertaining read.