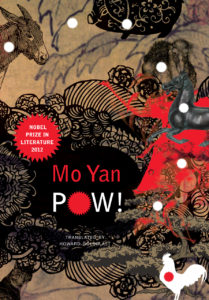 “Wise Monk, where I come from people call children who boast and lie a lot ‘Powboys’, but every word in what I’m telling you is the unvarnished truth.”

Just as the author, I too would like to present my opinion in all honesty.

Firstly forget the author is a Nobel laureate (2012); we tend to become biased, imagining they weave magic with the stroke of their pens, and everything they produce should be placed on the highest altar. This odious concoction of a novel should break all such misconceptions. Now before I categorically point out why I feel so negatively about this work, let me (try to) summarize this rigmarole of nothingness very simply.

A young kid prattles on about his misdeeds to an indifferent monk so he can clear his conscience and take his vows to become a novice. Pow! is split between two narratives – one where the child is reliving his life, which forms the crux; the other where he is addressing the monk. As the novel nears the end, the two narratives merge, wherein characters of one appear in the other. Very simple? Well this framework is the only part which makes sense. The story itself is so aimless it seems like a shipwrecked boat meandering away lost at sea.

If there is any structure at all, it is that of a spectacle that greets you while you are taken through the Chinese countryside. And what a spectacle at that! Local peasants have turned butchers, making a killing by injecting their meat with water. Every kind of animal under the sun is cut up for its flesh – dogs, ostriches, camels, donkeys. Meat ‘appreciation’ parades are held with preparations of delicacies. There is depravity everywhere and the moral fabric of the place is in tatters. People worship “Meat Gods” and “Gods for Virility”. Live ‘shows’ are held where someone displays his manhood. Debauchery is rampant where wives are suspicious of each other. And in the foreground of this pandemonium, ensues the life of Luo Xiaotong.

Trying to further simplify it, I assure you, will give you a brain aneurysm. (I tried).

A few points in reconciliation –

As an afterword, Yan explains his stance on Pow!. He says that like Gunter Grass’s Tin Drum, where the protagonist grows mentally but is stunted in physical growth, Xiaotong has grown physically, but with all his shenanigans, is still a boy mentally. This coupled with his writing style, which the Swedish Committee cited as reason for the Nobel, hallucinatory realism, gives the work some semblance of structure. However, my only concern is with his dogged emphasis on narration which inevitably results in a story with seemingly no direction. (The afterword is titled ‘Narration is everything’). This may leave some readers with a feeling that they’ve been taken for a ride.

Pow! does have its comic moments where one is left in splits. However, those moments of respite are few and far between. You may say that some novels don’t require direction, but then, “Hey! This is just my opinion”.