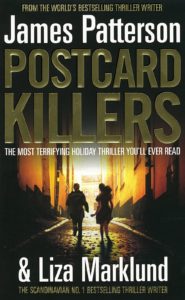 James Patterson can write a million novels in a year because most of his novels are co-authored by someone else.

Postcard Killers is co-authored by Liza Marklund, a crime writer who is a household name in Sweden.

The book is styled “The most terrifying holiday thriller you’ll ever read”, which is not true.

From the time Patterson has been collaborating with other authors, I’ve seen a drastic drop in the quality of his books.

Even though I was a bit apprehensive about reading this book, seeing a co-author’s name, I decided to give it a try because Liza Marklund has made a mark for herself and is known to be a good crime writer.

The plot of Postcard Killers revolves around NYPD detective Jacob Kanon’s tour across Europe’s most gorgeous cities, but the catch is, he is not on a holiday.

He is in search of his daughter’s killers. His daughter is not the only victim of these killers. Many young couples, holidaying in Europe, have also been ruthlessly murdered.

The Interpol and the police of different countries have no clue about the killers except that a Postcard is sent to a local newspaper prior to each of the murders, and after the murder, their bodies are arranged like famous paintings. Hence they are called ‘The Postcard Killers’.

When Dessie Larson, a reporter in Stockholm, receives the postcard this time, Jacob has no other option but to team up with her to track down these killers.

But because Jacob is not on an official assignment, but to settle a personal score, he faces many problems from the local authorities. Methodically, they unearth the clues and are shocked by what emerges.

I’ll give you a hint about this. If you’ve seen the TV Series ‘The Following’, imagine the same thing happening here. That’s it. Can’t reveal further.

The hunt takes Jacob and Dessie to the ends of Sweden. The story concludes with the background of the killers, the reason behind these killings and the motivating factor.

The book has an amazing start. I couldn’t put the book down once I started reading it.

But I think, somewhere in between, both Patterson and Marklund lost interest and the story just drags on slowly.

The climax, too, is not very spectacular as I had expected it to be. The killers, whose characters were built-up so carefully, give up very easily in the end and that is what I could not digest.

The relation between Jacob and Dessie looks superficial and unbelievable. But there are many hair-raising sequences which have been beautifully narrated and the book is totally worth it just because of them.

The character of Jacob is not pretty strong like those of Alex Cross or Michael Bennett, but you would surely pity him as you pitied Liam Neeson in the movie ‘Taken’.

If you do not expect too much from this book you’ll not end up being disappointed like I was. Postcard Killers is just a decent read and not ‘the most terrifying thriller’ as it claims.

Read the book to know –

“Who are the serial killers?”

“Why are they targeting only young couple?”

“What is the reason behind these postcards?”

“Can Jacob settle his score?”