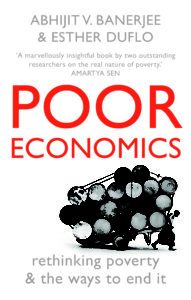 “We think we know the answer pretty well. Foreign aids & grants can break the poverty spell. But how much they work, only the results tell. Poor Economics brings out the truth of this poverty hell.”

It won the 2011 “Financial Times/Goldman Sachs” Best Business Book of the Year Award and it comes recommended from none other than the Nobel winning economist Amartya Sen.

So there must be something great in this book; thinking this I selected Poor Economics from among the list of books that I wanted to read and review.

Being an amateur economics enthusiast myself, I thought it would be a good break from all those love stories, chick-lits and history books that I’ve been reading for quite some time now.

Poor Economics as the jacket of the book declares is all about rethinking poverty and the ways to end it.

Being at the centre stage for many development programs, many new initiatives are born every single day with the sole aim of reduction of poverty.

Many of us believe that giving foreign aid, providing free of cost essential goods, government-funded primary schools and health care clinics, access to bank accounts, microcredit, and insurance products will be very good for the poor and the benefits that will arise out of these initiatives will pull them out of poverty over time.

But, what we do not know is that these policies and initiatives are grossly overrated and often they result in doing the opposite of what they intend to do.

This happens because the program designers or policy initiators focus on making the ideal policy and do not focus on the targeted benefits or the results aimed.

In this book, Esther Duflo and Abhijit V. Banerjee have tried to evaluate and analyse many poverty eradication programs and their outcomes. The extensive research required for such an analysis takes them to eighteen countries.

Consider this example from the book – the Government of one country where a lot of children started suffering and dying from diarrhoea started free distribution of ORS (the best treatment as per WHO).

But the outcome was the exact opposite of what the Government expected.

People, instead of going to government clinics, started going to private doctors who were most happy to give them expensive and ineffective medicines and antibiotics.

The book brings to the forefront many such initiatives and their ultimate failures. It also tells us why they failed and what should have done to make them successful.

The book is interesting and well written and is indeed very insightful. It will change many of our pre-established notions about poverty and the poor in general.

It has great academic value, not only for students of economics but also for anybody who has a similar interest in general.

I enjoyed it and I hope you would too. In the end, I hope that the book could have been written in a little more interesting way.

Also, I would have liked it more if the various studies quoted in the book would have stated the other parameters of the research as well (like sample size, constraints, assumptions etc.)

Note: This review is not an attempt at an academic review as I think I am not in a capacity to do so. I only intend this review for the purpose of readers who are interested in such genres and who may belong to the corporate world, student community or NGO platforms.