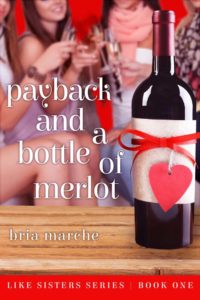 “Payback and a Bottle of Merlot” is the first in the Like Sisters series written by Bria Marche and even though I haven’t read the second part, I can surely say that this book at least is a complete story in itself. Mia James is a young independent professional who has a happening social life and a profession she loves. The only thing she craves is a decent family life for even though she has been married for a couple of years, her husband is always absent and least bothered. Her home is like a guest house where two people live for the sake of accommodation.

Jack Barnes had always been the busy professional that he is and that coupled with the fact that he has a daughter and ex-wife to loan his time to leaves little room for Mia. But all that Mia has held on to as truth is soon shattered when a chance meeting makes her come face to face with the sensuous Sasha, the hot exotic girlfriend whom Jack has been sleeping around with for years. Not having seen this coming, Mia is flabbergasted and sad but soon recovers with the decision that Jack has got to pay for this.

She soon involves her girlfriends and Jack’s ex-wife Karen and comes up with a plan to bring Jack down. What follows is a hilarious, witty, and adventurous journey which ultimately leads to Jack’s downfall. The book is an amazing read and just a perfect one to fire up a lousy weekend. Filled with wit and humour, some wild sex and crazy girl talks, this is a definite yes for any chick lit lover. I simply enjoyed all the characters including the effervescent Mia, her bunch of girls, Sasha, Aaron and even Max.

The plot of “Payback and a Bottle of Merlot” was simple and interesting and was delivered perfectly. I also liked the setting of the book – the quaint little Tarrytown was perfect to set the story in. I also enjoyed all the scheming and plotting that the girls often indulged in, together with their never ending gossip sessions and bitchy talks, they seem to be such a riot. I would love to have a company like that.

I also liked the way the book ended on a happy note and Mia got what she deserved in the end. Mia and Aaron shared a beautiful chemistry but it was Max that I wanted to read more about. In the end, the book was an excellent read after a couple of non-fictions that I had been reading for some time now, and thus I rate the book three and a half out of five stars while recommending it to all my chick-lit loving readers.