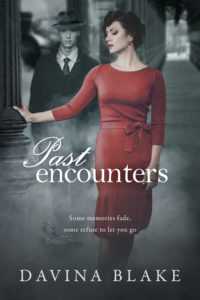 I haven’t read many books on the holocaust, so every now and then when I come across one, I get really excited to read it.

Even though I haven’t lived the history myself, I somehow feel nostalgic reading it, that somehow my reading about it will make the pain and sufferings of those who lived it less intense.

I came across Past Encounters on Netgalley which provides free review copies in exchange for an honest review.

So here I am, reviewing the book Past Encounters by Davina Blake.

The book is set in post-World War 2 England and revolves mainly around the husband and wife characters of Peter Middleton and Rhoda King.

It is the year 1939 and Peter Middleton is an average school teacher who, when the war breaks out, decides to join in as a driver and map reader.

Rhoda who is just nineteen then and is yet to experience any courtship between them opposes Peter’s move but finally gives in when Peter keeps insisting.

But as fate would have it, before Peter could see any live action in the war, he is ambushed by the Germans and taken as a prisoner of war. The next six years are spent in below humane conditions on the German soil doing back breaking for the Germans.

Unaware of all his hardships and even unsure of his existence, Rhoda after waiting for his comeback for almost five years, is caught unawares when love knocks at her door.

She most unwillingly gives in to the charms of Matthew Baxter, an assistant manager with a film production company. Meanwhile, Peter keeps himself going with the idea of Rhoda waiting for him.

Life moves on and it is the year 1955 and Rhoda and Peter are both married now.

But 10 years after their marriage, Rhoda realizes that Peter is having an affair. She discovers Helen’s existence in Peter’s life, only that it is not an affair but something else.

So what is it that Rhoda discovers? Will she be able to know who really Helen is? What about Matthew? Did Rhoda leave Mathew for Peter or was it the other way around?

Well, it is only for you to know when you read this fascinating new book by Davina Blake.

The greatest asset of Past Encounters according to me was its characters – Peter, Rhoda, Archie and Mathew.

They all had a certain charm about them which keeps you wanting more and more of them.

I liked the character of Archie the best, simply because of the way in which he transforms himself from a scared little boy to a confident and dependable individual.

The way in which the book is written is beautiful, for it makes alive all the characters and the scenes.

I could easily and very vividly imagine the scenes unfold in front of my eyes, as I was flipping through the pages of the book.

For lovers of history and drama, this book is a perfect way to spend a lazy Sunday afternoon. I give this book three and a half stars and recommend it to all my readers.