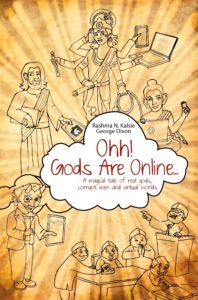 Srishti is one of the fastest growing publishing houses in India. The books published by Srishti have a decent story and also do well commercially. We have reviewed quite a few books published by them – “The Secret of the Dark”, “The Homing Pigeons”, “When Strangers Meet” etc. and have also interviewed Arup Bose, who heads the publishing at Srishti.

Ohh! Gods are Online is one of the latest books launched by Srishti. I picked up this book because of its blurb and the title. The blurb raises a funny question, “What if the Gods are addicted to social networking?” So, I assumed it to be a humorous book centred on gods getting glued to computers and leaving the world to fend on its own and the resultant chaos. It would surely have made a funny story but, the actual story of the book is poles apart from what I had in mind; it is more of a philosophical story than a humorous one.

The plot of Ohh! Gods are Online, mostly, is about the lives of, and the conversations between, Jesus Christ aka Chris and Lord Krishna. Both the gods are living as humans; Chris, in the beautiful coastal town of Clacton-on-Sea, England and Krishna as a poor boy in Delhi, India. The story begins when Chris reads an article in the newspaper about social networking and decides to open a facebook account. He is surprised to see that many of the gods already have an account there.

Once on Facebook, he begins chatting with Krishna and Gautam Buddha aka Buddy Roy and most of their conversations are philosophical in nature, about the meaning of life. Then the book suddenly takes a U-turn and introduces a string of different characters who serve no purpose to the plot. Sunderaman, Krishna’s boss, is a nasty human whose only aim in life is to satisfy his stomach and libido. Yashoda, Krishna’s mother, is a lonely woman devoted to her god and son. There are numerous other characters who come and go, with no contribution to the plot whatsoever, except increasing the length of the book and boring the readers.

The writing style of Ohh! Gods are Online is too is plain and tasteless. There is no excitement in the plot nor any magic in the narration. Certain parts of the book pickup in imagination like the parties of Old Nick, the evil god, in Jaywick. Rest of the book, I should frankly say, is bland.

The climax of the book is decent and ends on a promising note. The particular part where Krishna says “Why can’t human beings connect with their relatives, friends, neighbours and all the real people in their lives and yes, even with their Gods? Why can’t they smile at their fellow passengers? Why don’t they ever notice the guy sitting on the next seat to them on the local train? Really, human beings surprise me no end!” is the highlight of the book.

In conclusion, I would not recommend Ohh! Gods are Online to my readers because of the lack of excitement in the plot and the misleading title.