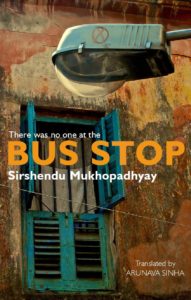 Originally published in 1974 and written in Bengali by the celebrated Bengali author Sirshendu Mukhopadhyay, There Was No One At The Bus Stop explores the deep dark world of adultery in the upper-middle-class of the then-contemporary Calcutta.

Translated in English beautifully and without losing its original essence (from what I have judged) by Arunava Sinha, this book strikes as a remarkable read to those especially, who count themselves in the fans of Premchand, Sharatchand and the likes of them, and who are particularly fond of Bengali writing of the 1950s to 1980s period.

Trina is a married woman who lives with her husband Sachin and two children Manu and Reba in a posh Calcutta neighbourhood.

But the comfort of her husband’s riches and the company of her family is nothing as compared to the lures of the Debashish, her childhood acquaintance and current neighbour from across the street.

Debashish, who couldn’t bring herself to love her money lusting wife, lost her when after 5 years of their marriage, she committed suicide.

Whether it was her husband’s other love interests or bouts of depression for any other reason, no one could really guess the reason that made her kill herself.

Debashish, who now lives with his only son, still desires Trina and Trina him.

They continue their not-so-secret love affair over hushed tones on the telephone and vide clandestine meetings in the public, but people have now become uninterested.

No more do their families care; in fact, they have learned to ignore the situation. No more does Trina’s husband and children care.

Both Trina and Debashish are caught between the necessity of familial ties and the allure of unfulfilled love.

The story progresses slowly and is interspersed beautifully with raw emotions of love, lust, indifference, hate and even motherhood.

The characters strike you as normal people caught in the daily web of grief and pathos.

There Was No One At The Bus Stop perfectly captures both sides – the positives and negatives of committing adultery and in my opinion, succeeds in retaining the originality of the story, which in many cases is often lost in translation.

All of 120 odd pages, the book provides for a slow and smooth read on leisurely Sunday afternoon and can easily be done away within 3-4 hours.

Overall, an okay read, I would recommend this book to all slow-paced novel lovers; people who are ardent fans of realistic fiction and would not think twice before picking up a slow-paced novel.

In the end, I would rate There Was No One At The Bus Stop three stars out of five.

Book Review Sirshendu Mukhopadhyay There Was No One At The Bus Stop
by Sankalpita
Leave a Comment
Prev: Dollar Bahu | Sudha Murty | Book Review
Next: I Am Malala: The Story of the Girl Who Stood Up for Education and Was Shot by the Taliban | Malala Yousafzai | Book Review