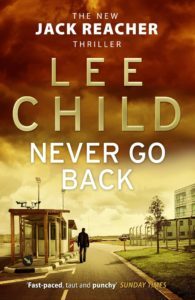 “Jack Reacher is back and this time he is in the capital, in his old office. This is his yard, his playground. Do not mess with him.”

Finally. Finally, I get this chance to review a Lee Child novel and I’m super excited.

It is a sheer delight to read his books, to read about Jack Racher smashing skulls and breaking bones.

The latest in the Jack Reacher series is this 18th book Never Go Back.

The first book of Child that I read was “Nothing to Lose”, and since then I’ve become a great admirer of his works and have read 7-8 books of the series, but never got the opportunity to review any of them.

The heart and soul of any Lee Child book is the protagonist “Jack Reacher”. If you like him, you’ll like the book and vice versa.

So, let me start by giving you a brief background of Reacher’s character. Reacher is an ex-Military Police CO, who after retirement, leads a nomadic life; his baggage – a toothbrush, an expired passport and some cash.

He hitches rides and travels from one part of the country to another. He is 6’5” and weighs 250 pounds (quite opposite to Tom Cruise in Jack Reacher, the movie), he can predict the next five punches or kicks you are gonna throw at him, and he has an automatic clock set in his brain.

All of the Reacher books have this background in common – Reacher reaches a remote town in the US hinterland, there is a conspiracy going on and the townsfolk are suppressed, Reacher fights the bad guys and gives the town a happy ending.

“Ninety-nine of us grow up to fear the howl of the wolf. Only one of us grows up to envy it. I’m that guy. I’m Jack Reacher.”

The plot of Never Go Back was set into motion three books prior, in “61 Hours” when Reacher calls his old office for some information. He speaks to Susan Turner, the current incumbent in Reacher’s old seat. Liking her voice, he decides to go to DC and meet up with her.

This book begins with Reacher arriving in DC and visiting his old office. Even before the nostalgia fades, he is trapped in a 16-year-old, trumped up case.

To prevent him from disappearing again, he is reinstated into the military. To top it all, Major Susan Turner, the real reason for Reacher coming back, has been arrested for bribery.

But can he fight his way out of this shit-storm?
Can he prove his innocence and save Susan too in the process?
Why has the military dug up a 16-year-old case?
Why do they want Reacher reinstated?

You have to read the book if you want the answers to these titillating questions.

Jack Reacher is one reason why I can just devour all of Lee Child’s books.

The plot is nowhere slow or dragging. It is stimulating and is sure to keep you glued. There is no way you can put the book down once you begin reading it.

If you enjoy reading fast-paced action packed thrillers like those of Clive Cussler, James Patterson or Matthew Reilly, you will surely love Never Go Back and all the books of the Reacher series.