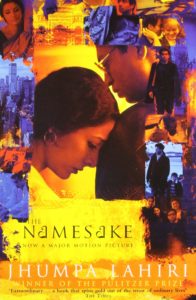 I am particularly hesitant to reading books by renowned authors; authors who bag Nobels and Pulitzers and Man Bookers. It is not that I haven’t tried. Most of what they write, though beautiful, go way over my head. I would rather prefer reading action thrillers, in spite of them having next to zero literary value. So it is with great reluctance that I picked up The Namesake written by Pulitzer winner Jhumpa Lahiri, and that too 10 years after it was first published. Her book, ‘Unaccustomed Earth’, having been rated 5/5 by Sankalpita, had led to me having high expectations about ‘The Namesake’ as well.

Books with family dynamics as their central plot is a tried and tested formula. If the basic elements of story-telling like character build-up and narration flow are maintained there is a little chance that such a book will fail.

The Namesake is the story of an immigrant Bengali family living in the US – the Gangulies. Ashima Ganguly gives birth to a baby boy in 1968. Her husband Ashoke, had a scrape with death in a train accident 7 years earlier and believes that the book he was reading – The Overcoat by Nicolai Gogol – was a lucky charm which saved him. They end up naming their son Gogol, the namesake of Nikolai Gogol. This odd name turns him into an introvert and he decides to change it to a more acceptable Nikhil. The book takes us through Gogol’s life as he grows up, attends an Ivy-League school, becomes a successful architect, falls in love with an American girl, breaks up with her, marries a Bengali girl and ends up with a divorce.

“Is that what you think when you think of me?” Gogol asks him. “Do I remind you of that night?” “Not at all,” his father says eventually, one hand going to his ribs, a habitual gesture that has baffled Gogol until now. “You remind me of everything that followed.”

As a desi in America and a vilayati in India, the perils of an American-born-Indian child is brought out beautifully in the situations where Gogol and his sister Sonali visit Calcutta. The way Gogol tries to distance himself from his family and his Bengali origins ought to make you angry, but Lahiri explains his emotions in such a detailed and vivid manner that you end up empathising with him. The difficulties that a traditional Indian house-wife faces in a foreign land, amidst new people, new language and new cultures is excellently portrayed through Ashima’s character.

Not limited by the size of a short-story, like in ‘Interpreter of Maladies’ and ‘Unaccustomed Earth’, Lahiri extravagantly builds up her characters. The sophisticated Ashoke, timid Ashima, confused Gogol, and all others, Americans and Indians alike, have flair.

In ‘The Namesake’ you do not just read the story of a family; you get to live with them, feel their sorrows, share their joys, understand their bewilderment, and empathise with them; you get to be a part of the story.