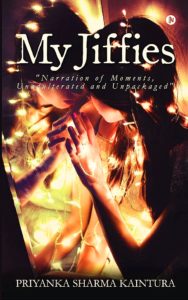 I am used to reading all kinds of books – from murder mysteries to period romances to series fiction and non-fiction but rarely do I come across a book which is so different that it is difficult to confine it to a single genre. My Jiffies: Narration of Moments, Unadulterated and Unpackaged by the author Priyanka Sharma Kaintura is one such book which left me both baffled and inspired. The last such book that I read was Zelaldinus by Irwin Allan Sealy which too was an equally interesting yet baffling read.

My Jiffies is a beautiful and rather eccentric potpourri of musings attempted in a variety of forms. The book is divided into seven categories each of which is like an individual colour coming together to form a wholesome and unique rainbow. The seven sections include – Orations, Eclogues, Monologues and Dialogues, Stories, Pathos, Satire and Sarcasm, and last but not the least, Life Aphorisms and Epigrams.

Don’t be fooled by the complex names though, the beauty of the author’s writing lies in the way she writes about ordinary aspects of life in an extraordinary way. Her simple yet profound words touch one too many chords and often leave the reader with her own train of thoughts. So many of her musings were thoughts to provoke and facilitated soul-searching and inward thinking.

Though each story in the book is bite-sized, and My Jiffies can be read in a 3-hour period. I took a lot of time reading it and the reason is that I found myself wanting to relish each and every thought that the book sparked inside me. Also, that way the book made a much deeper impact on me.

My Jiffies does not tell you a story to be quickly read and get done with and reach the end. This is a book which should be relished and consumed slowly and gradually like an aged wine and that is exactly what I did. Among the many bite-sized writings, my favourites were – What is Gana of Ganapati, Lily and Tulsi, the nine shades of Durga, Being human, Arjun or Bhima, Hurricane Katrina and many others.

What I also liked about the book was that My Jiffies doesn’t restrain itself to a single theme. It talks about everything and anything, in turn, assuring that it is has something for everybody. It’s like a collection of random thoughts rather than a planned script. It is this random theme which had me convinced that I need to read more of such books in future. I hope the author soon comes out with a book 2 because I simply cannot wait to get my hands on it.

Moving onto the things which could have been better, I think the book should have had a better cover, even though the picture is beautiful it’s rather unclear and too distracting. Taking away the necessary attention from the title. Also, the seven sections have complicated terminology as names which might put off many readers from picking up this book.

That being said, My Jiffies is a book which will surely leave a mark on you. Pick it if you like random writings, musings, short stories, and poetry. You will be surprised by what you read.