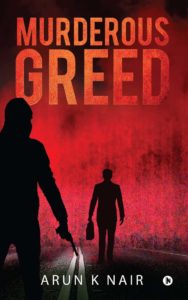 I am a big fan of Indian crime thrillers and I really love it when I discover hidden gems. A few previously-unheard-of crime thrillers that I came to love are Based on Lies It Begins, The Mahabharata Murders and 3 and a Half Murders. Just like the beforementioned, Murderous Greed was yet another crime thriller that I thoroughly enjoyed.

Murderous Greed, as stated above, is a crime thriller. It can also be termed as a murder mystery more specifically.

In a small township of Avadi one morning a woman suffers a fatal accident at the hands of a chain snatcher. She immediately succumbs to her injuries. Not far away, an upcoming infrastructure tycoon is gunned by bikers on his way back from office. The only witness to this crime is his secretary, Drishti who informs the police of the incident.

In a town which has rarely seen any mishap, two murders in a day arouse suspicions. The responsibility to unravel the mystery behind these two seemingly exclusive incidents falls on the shoulders of Inspector Satyajit. Soon, Inspector Satyajit finds himself getting to the bottom of a crime whose clues lead to the very underbelly of organized crimes – a gun club, a business-politics nexus, and much more.

How is the Plot?

The plot of Murderous Greed is nicely conceived. As the pages turn by, the mysteries of the story are revealed layer by layer. There are multiple subplots which add to the suspense and the entertainment quotient of the book.

What about the Author’s Writing Style?

The writing style of Arun Nair is decent. He makes use of a simple language which is easily understood. His main focus is on creating thrill and that is aptly achieved. The fact that he is able to write a good thriller in just over 200 pages speaks a lot about his skills as a writer. In the end, it is the quality and not the quantity that matters.

Were the Characters good?

How was the Climax?

The climax of Murderous Greed is unpredictable and gives a befitting end to the story. I liked the way the reader is left clueless right till the end. It is something which every thriller reader aspires for.

Overall, Murderous Greed is an entertainer. It is a nicely written short read with some interesting characters and well-executed plots, together, all of which succeed in telling us an intriguing crime story.

What did I Love?

I loved the way the book cover and the blurb were able to create excitement from the very beginning. That the story inside also lived up to it was also commendable. The climax was also something which I thoroughly enjoyed.

There were a couple of editing mistakes which earned the book some negative points. Apart from this, I did not find any major flaws in the book.

Who should read it?

Readers who do not read many crime thrillers in a year.

Who should skip it?

Readers who read a lot of crime fictions because that would mean comparing Murderous Greed with some of their best reads. While it is a good read, it’s a not a five-star rated one (great read) hence it will be unfair to compare it to the likes of those.

Can’t wait to read it? Grab your copy at the link below.