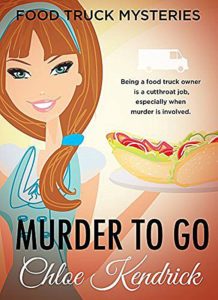 “Murder to Go” is the first part in the series “The Food Truck Mysteries” and is written by author Chloe Kendrick. Chloe has to her credit the hit “Animal Instinct” series which is comprised of six books. In this book, the author depicts the story of a jobless graduate Maeve Kinkaid who chances upon luck (or shall we say bad luck) when upon the demise of her aunt she inherits as a part of her aunt’s estate a food truck named Dogs on the Roll.

The truck in question is a small business which her aunt used to run with the help of a Basque chef. Soon, she has a job and that too a quite successful one. She is happy to no bounds and also confused. Happy, because all of a sudden she doesn’t have to spend her entire day doing nothing lying on her parent’s couch and confused because she simply cannot figure out why out of all possible heritance which she could have bestowed, the aunt named the peculiar truck to her.

Nevertheless, she is happy to start her new job. But just as she is coming to terms with her new routine, a murder disturbs the neighbourhood. The murder in question is of the owner of a competing food truck which had the most sought after spot in the vicinity. As the investigations start, both the detective involved and Maeve uncover some details which leave everyone baffled and suspicious. A forged will, an unnatural death of her aunt, another similar gruesome murder of a food health inspector, and the newly acquired sales through the new business spot leaves everyone doubting Maeve’s intentions and involvement.

So what will Maeve do? How will she prove herself innocent? Will she be able to uncover the mystery behind the three murders? Will she be able to solve the food truck mystery? Will she get to date the suspecting but hot detective? Will she lay to rest all doubts against her? Find out this and much more in this sensational and adventurous novel.

“Murder to Go” has a very interesting plot and storyline which to me appeared very novel and well thought of. All the subplots are also quite charming and well-knit to the main plot. The character of Maeve is funny, charming, witty and courageous – qualities which all girls aspire to have. At the onset, the book appears to be a typical chick-lit novel but as the story progresses the mystery surrounding the murder is further complicated and developed into a thriller like subplots which does an excellent job of keeping the readers glued until the end. The content is further enhanced by the excellent cover design and an appealing blurb which helps the readers little in resisting its lure.

Though part of the three book series, the book can be easily read as a standalone novel as the current mystery is solved and everything goes back to being normal. The author does leave one single loop opened to maybe exploit and develop in the next novel. Overall, the book is a great read and I would recommend it to all my readers.