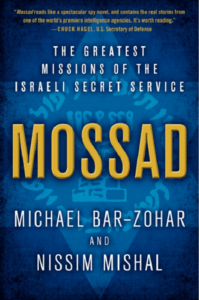 “The dirtiest actions should be carried out by the most honest men.”

Mossad needs no introduction. It is one of the world’s most secretive and powerful intelligence agencies. This book is an attempt by the authors Nissim Mishal and Michael Bar-Zohar to bring to the forefront few of the Israeli secret service’s most successful and dangerous missions. In their research, the authors have spoken extensively to various people who concern themselves with Mossad and as a result, the authors have presented a book which is a highly interesting read on Mossad’s many operations.

The book almost reads like a spy novel. This along with the fact that the authors have restrained from giving too much technical information makes the book a very compelling read. The stories are often narrated in a movie like style which facilitates visualization and imagination really well. Though all the chapters can be read as standalone stories, given the writing style of the authors, it is really difficult to put the book down at the end of each chapter. Some stories may appear even incredulous yet the authors assure us that they all are actually true.

As the book progresses, Mossad’s enigma as an intelligence agency also grows. Some of the most famous missions that the book has mentioned are the capture of the infamous Nazi criminal Adolf Eichmann, the eradication of the Black September, the complete obliteration of the Syrian nuclear facility, assassination of important Iranian nuclear scientists and the rescue operations of thousands of Jews from many hostile countries.

Mossad establishes itself not just as a formidable agency in the minds of its readers but also as an agency which commands respect. Its duties and operations are not just concerned with the protection and service of the Israeli nation but are also identified with the greater good of Jews all over the world. Its successful attempts to rescue thousands and thousands of perpetually suffering Jews from hostile countries and bringing them home to their promised land of Israel is an act which surely commands respect.

A few of my favourites among the many operations listed in the book are the kidnapping and capture of Adolf Eichmann, the adventure of master spy Elie Cohen and rescue operations of Syrian virgins and Ethiopian Jews under operation Solomon. Another interesting thing about this book is that the authors don’t just mention the successful operations but the failed ones too and that lends Mossad and this book a credible and believable character.

Those who are looking for a more detailed and academic read on Mossad would do better to skip this book since that is not what this book is. It is rather an entertaining and story like version of the Mossad’s various operations told in a spy fiction sort of way. The book gives some background info on Mossad and its various heads but not much on Israel. Overall it is a titillating read and therefore, I rate it 4.5 out of 5 stars while recommending it to all my readers.

Can’t wait to read it? Buy your copy at the link below.