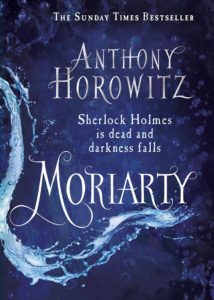 Sherlock Holmes is one of the most beloved characters in fiction and is a world famous detective. Sir Arthur Conan Doyle’s hero has captured the imagination of people then and now, and if the movies and TV series that keep coming out are any indication, the character’s popularity remains to this day. And after the characters and stories were categorically released to the public domain following a U.S. Supreme Court decision not to hear a case from Doyle’s estate that wanted to appeal a lower court’s decision that most of Doyle’s work no longer has copyright protection.

Anthony Horowitz is one such writer who is steeped in the world of Sherlock Holmes, and it was very much evident in his earlier book, The House of Silk. It was only natural that the Doyle Estate would want to choose him for their first authorized Holmes novel, only though this one, Moriarty, does not have either Sherlock Holmes or John Watson. Instead, the story takes up from where Sherlock Holmes and James Moriarty tussled at the Reichenbach Falls and apparently fell to their death.

The story revolves around Frederick Chase, who is a detective from the American agency Pinkerton, and Inspector Athelney Jones, whom die hard fans will recognize as the officer who assisted Holmes in the adventure of The Sign of Four. Chase came searching for Moriarty as he believes that the infamous European mastermind was looking to reach out to the American market and was supposed to join hands with another American criminal mastermind Clarence Devereux. However, Moriarty’s death put paid to those plans. But Devereux sees this as an opportunity to take over London too, and has already sent his henchmen to do the work for him.

Chase and Jones work through a coded message trying to find clues to Devereux’s identity, but they first encounter the brutality he is willing to go to after the systematic murders of Scotchy Lavelle and everyone at Blade stone House. What follows is a trail of murder and mystery in true Holmesian fashion, with the twist in the tale coming as one would expect in any Sherlock story that Doyle himself would have written.

Horowitz once again shows his mettle as a capable writer of the Sherlock Holmes world, but what he has done in Moriarty is actually shown all the loopholes that lie in Doyle’s story that killed Moriarty and supposedly ended Sherlock Holmes too. It is excellent in its deductions, and even though neither Sherlock nor Watson were present in the story, Chase and Jones were able representatives, with Jones even musing at the beginning of the story that he learnt the art of investigation by studying Holmes and by being dogged. Chase and Jones also even fantasies about finding their own Mrs. Hudson, because London needed a new consulting detective.

For Holmes fans and for those otherwise, this is a very entertaining book to read, and while the reader is expected to have a little bit of back story, it still has a good punch for a detective novel. Definitely worth a read.