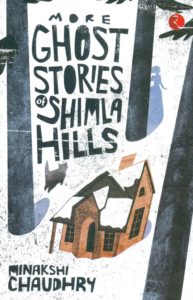 As I flipped my way through the 145 odd pages I realized that most of the tourist places in Shimla have a ghost story linked to them. The Gaiety Theatre, The Viceregal Lodge, The Mall Road, The Scandal Point and The Helipad are all associated with one ghost story or another. What was even more interesting than the fact that major tourist locations in Shimla are haunted is the fact that most ghosts belong to the Colonial British Era, and have a feel of the old world charm in them. It is quite an interesting experience reading about all those English ‘Memsahibs’ fluttering in their exquisite gowns and finery, in and around the streets of modern-day Shimla.

The stories of More Ghost Stories of Shimla Hills are diverse and exciting with most of them, as previously mentioned, pertaining to the tourist places in Shimla. The titles range from ‘Torture Cell of the Gaiety’, ‘The Ghost of Lord and his Sister’, ‘Viceregal Lodge’, ‘The Rising of the Dead’, ‘The Haunted Mansion’ to ‘The Nakalchi Bhoot who Died’, ‘Nawab comes calling’, ‘The Muslim Ghost’, ‘The Hand’, ‘The Knock’ and ‘The Road Hunters’ among many others. My favourite among these is ‘The Hunters’ for it is not a single story but a collection of various anecdotes pertaining to the ghosts haunting different roads, bends and curves of Shimla.

About how this book is different from its prequel – well, it isn’t. It is just the same in the way that all stories are not figments of author’s imagination but are anecdotes narrated by real people (about their supernatural experiences) presented to the readers in the form of stories. More Ghost Stories of Shimla Hills, I believe, is spookier and scarier than the first one, and has an old world charm to it. Also interesting is the way in which a few stories have a fun and humour element to them, like in the case of ‘The Nakalchi Bhoot who Died’. Well, my suggestion to the readers is to go for both the books and enjoy them, preferably in the dead of the night sitting under an old deodar tree. It’s going to scare the **** out of you!