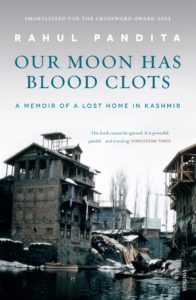 In my recent years as a book reviewer, I have never come across a book so painful that it hurts to flip pages and read further. Until now, I used to feel sad whenever I thought about Anne Frank and the injustice which was done to her in the nascent years of her life. Now, when I read this book, it seemed that reading Anne Frank was as easy as a cakewalk, not because her pain was any less, but simply because, the way Pandita captures the agony of the displaced Kashmiri Pandits is so painful and heart wrenching that you cannot help but feel aggravated at one of the cruelest episodes in the history of modern-day mankind.

The author first starts with the glories history of Kashmir’s ancient and modern past and about its association with Hindu religion. He then moves on to talk about the times when Islam made inroads into Kashmir and the time when the paradise of Earth was truly a paradise for people practising both religions. The time when Kashmiri was a harmonious and secular way of life rather than a religion dominated sub-culture.

What pains readers the most is the situation which the displaced Kashmiris faced at the hands of their fellow Indians, their own neighbors who betrayed them, their own army men who instead of helping them, exploited their helplessness and weakness, their own government which instead of protecting them from such militants could not even guarantee the safety of their land and belongings, and which did not even think twice before rubbing their names off the land records or confiscating their lands in the name of industry and development. In such a scenario, where does a Kashmiri return to? There is no land, no sweet memories, no trust and no welcome for a displaced Kashmiri.

Our Moon has Blood Clots is heart wrenching piece of account and is a must read for every Indian. Therefore I give it a five out of five stars.