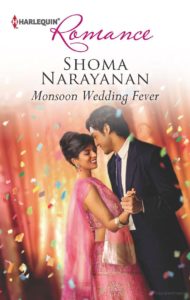 ‘Mills and Boon’ has always been a girl’s favourite companion. It is the one which accompanies a girl all the way from her teens to early womanhood, and often, even then, it is almost inseparable from the woman that she would have become. Though I have myself been an ardent reader of the Mills & Boon throughout my growing years, I have always found a gap. The gap was in terms of the people, places and the mindset to which a particular M&B novel will appeal. Being from a traditional Indian background, I often found myself craving for that slight touch of Indian-ness in my then favourite series.

It was many years later though, that I heard about and chanced upon the Passion Contest of the Mills & Boon Indian Chapter, where I discovered the novel Monsoon Wedding Fever by Shoma Narayanan. Unable to contain my curiosity I purchased the book and needless to say I was spellbound by the book. Shoma Narayanan writes with the exact skill and precise of any other Mills & Boon author, and just like her global counterparts her words do enough justice to the series which she writes for. But more about that later, let us get a gist of the story first.

Riya is an easy going fun loving modern day professional girl who lives in Mumbai with her flatmate Gaurav. The two, though sharing a company-sponsored flat in suburban Mumbai, are simply friends and colleagues. Riya is leading her normal life and enjoying every part of it when suddenly one day, she comes across a figure lying in her living area. The figure, much to Riya’s discomfort, is Dhruv, a guy who Riya fell in love with, six years ago and who then, not being ready for a commitment and not believing in love, had mercilessly shattered all hopes of Riya. Now, Dhruv is in India for his cousin Gaurav’s wedding, and as already mentioned the earlier also happens to be Riya’s flatmate.

As Riya comes to term with this not so easy arrangement, she decides to maintain her calm and ensure at all points, as much distance between herself and Dhruv as can be practically possible. But what can one say about fate and destiny? As Riya strives to do what she has determined to do so far, she slowly and steadily finds herself falling for Dhruv again. But will Dhruv too fall for Riya too? Will she be the girl he would finally want to marry? Will Riya be able to control her feelings? Find out all this and more in this tantalizing tale of love, emotions and drama.

Coming to what I liked about Monsoon Wedding Fever. To start with, I like the look and feel of the book, the catchy title accompanied by an equally enticing cover speaks volumes about the contents inside. I also liked the “the big fat Indian wedding” theme which this book seems to revolve around. Also admiring is the author’s fresh style of writing with the correct amount of romance and seduction playing their parts in the making of a good book. Thus, overall, I rate Monsoon Wedding Fever three out of five stars and recommend it to all Mills & Boons fans all over the world.