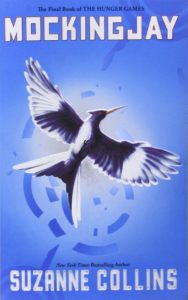 Mockingjay is the 3rd and final book in the Hunger Games series. The book, true to its name, is the story of Katniss as a Mockingjay. As the readers of the previous books may recall, the third quartell quell Hunger Games was abruptly ended when Katniss, with the help of an old inventor and previous victor Beetee, blows away the force field that envelops the Hunger Games arena. The moment it happens Katniss is sky lifted by rebel hovercrafts and taken into safe custody by the plotting rebels, who later, in a twisted turn of events, turn out to be Plutarch Heavensbee (the Head Gamemaker), Finnick Odair and Haymitch among the others. As the shell shocked Katniss comes to term with this new development, she soon learns that Peeta has been captured by the enemy and is being brutally tortured by President Snow’s men, and that in the aftermath of the force field blast, District 12 had been burned down to the ground by the Capitol forces. A much distraught Katniss finds some relief in the fact that her Gale had been able to rescue both her mother and sister Primrose, along with some 800 other locals from the bombings. Gale had then brought them to District 13 where they have been currently granted shelter and where Katniss finds herself now.

The third book promises action and drama on a much higher level than the first two ones though while reading it, I was a little disappointed as my expectations relating to the plot did not match with what was penned down by Collins. By and large, the plot and the story did not invoke in me the kind of interest and fascination it did in the first two parts. I guess that is what happens when one sets unbelievably high standards for the author and the author is not able to relive the magic she created in her first two fictions. But then, do not be de-motivated, for what did not grab my attention and fervor may surely catch yours and who knows you may find this one much better than the previous ones.

So, finally coming to what I liked in the book. I liked the way Katniss kills one of the most powerful persons in the second and third book (well, I won’t spoil your fun here). I also liked the way, she finds herself in love with the right guy towards the end, and settles down to live happily ever after. I liked the intense emotion and drama of the love triangle which ran its course throughout the book. It was not mushy but yet very emotional and subtly romantic. Moving onto what did not click with me – for starters, I did not enjoy the over exploitation of the Mockingjay theme; I also did not like the much hue and cry over camera footages as a means to win wars. The war scenes, focused on only Katniss and her confidantes, few as they were, did not seem much like war but rather like the Hunger Games itself, in which Katniss always takes the main lead. Even the brain hijacking of Peeta by over drugging him, seemed a bit boring and unnecessarily dragged, towards the end. Thus overall, the book is an average read when I compare it to its prequels. However, it does stand out against other contemporary sci-fi fictions.