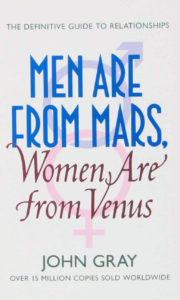 If we look into the relationship psychology of men (supposedly Martians) and women (yup you guessed it right Venusians), both have a different perspective about an ideal relationship, but can one really divide both the categories into entirely different races. I wonder what god might think if he ever lay his hands on this piece of crap load, thinking that did I really “created men and women equal in my own image”. I mean really this book seems so sexist at times that I just had to keep it down.

My broader perspective on the book is that I’m inherently sceptical when someone tries to reduce human behaviour to simplistic, read about help guide or tries to differentiate on the basis of our gender-based behaviour, if only it had stopped there (I really hoped that the author might just put a spin off in between somewhere) but it went on to resorting to simple explanations for that too. Too much to bear for me. This is not psychology, neither is it some mystic science. I wonder if it’s a science experiment gone horribly wrong.

“One does not simply put women and men into different realms”. The book shows men as creatures with very fragile egos and can be easily pinned just by pointing out a flaw in their work, or still better if you want your man to really hate you, just keep pointing him in what and how to do the things he’s “born” to do (Supposedly according to author there are very few things men do on mars). They just hang out in their cribs/caves etc.

Women on the other hand are shown to be such over sensitive creation of god that most probably god took abundant time in creating them, seem like they only love to talk about their feelings and problems for the sake of sympathy or empathy, not for the solutions (I mean really, like always???) and that they are not looking for solutions.

I’ll like to point a thing which really pinged me about this book. The author at the start points out an incident where he and the wife have an argument over a silly thing. He goes on with about it and explains how he was just about to walk out on his 5-day-old born child and wife (again seriously Mr. Gray are you or now that you have put us all men in the same category, so insensitive that you’ll/we’ll leave a new-born child with your wife mind you who’s in extreme pain). I’ve believed a book which starts which deceiving arguments can never be accurate or even close.

Final word – Please avoid if you are looking for something more on the lines of feminism, only and only meant for those who are really desperate to make their relationships work, I mean your relationship counsellor has failed you miserably, everything else has failed you. I’ll just say it’s better to work out your differences by talking to each other than referring to a help guide which might change you the way you think about your loved one.