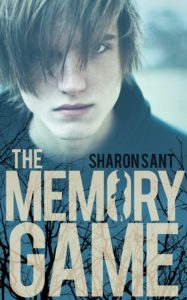 Sharon Sant has to her credit not one, not two but eight different titles. The Memory Game was published in 2013 and since then has been quite popular among various categories of readers. I got a chance to read and review the book when Lawsome Books through NetGalley obliged me with a digital copy in exchange for an honest review. The blurb was exciting and so was the cover and thus I excitedly sat down to read what the book had to offer.

Talking about the story and the plot first. I liked the plot, it is concise and compact and unique in its own way. The story is of a fifteen year boy David who gets killed in a hit and run accident but even after several days of his death he keeps hanging around. He is lonely and does not know what to do or what to expect. He simply cannot fathom the reason why is he still hanging around. After several days of roaming around, he discovers that Bethany, a girl whom he used to bully in school and who is hated by all, is the only one who can see and hear him. Thus, she becomes his only hope.

On the other hand, Bethany has spent most of her life living in a cocoon. She is hated and deserted by all. At home too, she spends most of her time alone, happy in her own company but that is until she chances upon the ghost of the recently killed boy from the school. So where will fate take both of them? What will they discover together? Will David figure out the reason behind his wandering?

The concept is interesting and well delivered. The plot is also single tracked and remains fixated on the two main characters of David and Bethany, both of whom are interesting in their own ways. The after-life angle combined with friendship is surely a treat. I liked the way the author has made good use of emotions and feelings of these unconventional characters to portray the agonies faced by normal teens.

The Memory Game also addresses many issues of our society – the way poor are looked down upon, the way the unpopular kids are treated by the popular ones etc. The end though not exciting is peaceful and most beautiful. It also left me quite stunned as I could not believe that what happened did actually happen. I was always suspecting some different game plan all throughout.

But before one decides to go for the book I would like to state what to expect and what to not expect in the book. If you are looking for horror, this is so not your book. It is not all spooky and the ghost is rather a friendly one. The book is also not a thriller. It is an emotional read and well suited for people who have a penchant for Young Adult mixed with emotions and love. Overall, I liked The Memory Game a lot and would recommend it to all my readers and rate it three and a half out of five stars.