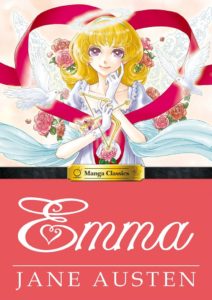 Jane Austen does not need any introductions for she is the one who has inspired most readers of yesteryears and today, and one who will continue to be a source of inspiration for the readers of the future. It is true that since her time, the world has changed and so have the tastes but it is also equally true that even today she remains an evergreen author; the charms of her works never fading with time. The Manga Classics initiative by the Udon Entertainment & Morpheus Publishing pays an ode to her work by converting the timeless classic into a Manga comics to open up the wonderful world of Jane Austen to an entirely new set of readers.

Manga Classics: Emma is the story is of a young girl Emma who is unmarried and lives with her father Mr. Woodhouse, in the huge estate which he owns. She has for her neighbour the charming Mr. Knightley, who is quite modest and humble despite of his large estates. Emma herself has quite an endearing personality and in her past time, she loves to try her hands and luck at match-making. Though the intentions are good, she often ends up making a mess out of many a decent situations and is thus never quite happy with herself in this occupation.

In her matchmaking adventures she never quite realizes when she actually falls for the young Mr. Knightley and has develops deep feelings for him. So will Emma get the love of her life? There must be many who already know this story inside out but for those who do not know what happens to Emma and her love torn heart, this comics is a wonderful way to discover Emma and her world and that too in a lot less time.

Manga Classics: Emma is pleasing and as already mentioned earlier, it is indeed a great way to tell a classic story in a non-serious and modern way. The book as the comic genre commands, I believe is a lot toned down from its original counterpart in terms of seriousness, plot structure and characterizations. Since the characters are too many and the time is a little too less, I often found myself having a hard time memorizing the characters and their many acquaintances. But that was the only issue I had with the book. My original stance that the book is a great read still remains intact.

The illustrations are also quite wonderful and a great effort has been taken to make the characters recognizable in the black & white setting. Minute details such as hairstyle, facial expressions, way of dressing have been added to make the characters stand out from each other and to help the reader avoid confusion. The illustrations overall are very interesting and fascinating with their period clothing and resplendent estates and they are probably the best part of the book. I end this review by rating Manga Classics: Emma three and a half out of five stars and recommending it to all my readers – young and not so young too.