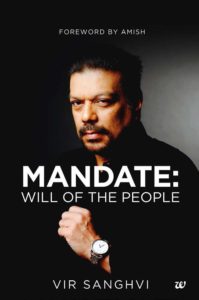 If we talk about India’s recent political history there are very few books which do the vast subject justice. From the early era of the 1970’s to the recent most general election of 2014, there are not many books which give a comprehensive yet concise account of all that has happened in between and how the events have helped shape up today’s India. Vir Sanghvi, the renowned journalist and TV anchor has put together a decent effort and formulated an all-inclusive book of India’s political history.

Vir Sanghvi claims that “Mandate: Will of the People” has been written according to his own understanding of the events as they happened and nowhere claims that all that has been written is hundred percent true. In that way, the book is a little subjective rather than very factual, and that is good because after all facts are available everywhere but the most important thing to understand is the people who helped shape those facts and the motives that they had.

Vir Sanghvi, being from the field of journalism, makes references to many of his own interviews and stories which he had covered in the past. He also helps the reader understand the motives that inspired certain decisions and the result that came from those decisions, but all this is strictly based on his own judgement and understanding. During his entire tenure he was in constant touch with many famous people and thus he also quotes extensively from his own conversations and meetings with these political figures.

From the events that helped Indira Gandhi being elected as the Congress Party President to the days of her first tenure as India’s Prime Minister to the events which followed in the course of Emergency, from the events which enabled Janata Dal’s first government to the events which brought back Indira Gandhi’s government to the Operation Blue Star and the subsequent killing of her by her bodyguard and the resulting anti-Sikh Riots of 1984, the book very beautifully charts the Indira Gandhi years. Later it courses through the lives of other important political figures namely Rajiv Gandhi, Atal Bihari Vajpayee, Sonia Gandhi, PV Narasimha Rao, Manmohan Singh, VK Singh, Lal Krishna Advani among many others.

In addition to this, “Mandate: Will of the People” also explores the reasons why each government was voted in or voted out at each general election and how that “Mandate” of the people has shaped the present as it is. This book thus is an all-encompassing read about modern India’s rich political history and all of 156 pages, it is an absolute pleasure to read. In addition to this, the foreword by Amish adds to its glamour and charm. I, therefore, recommend this book to all non-fiction readers as a must read.