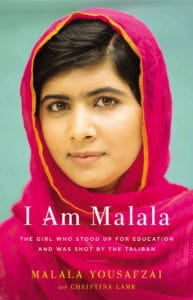 I am Malala is the brutal but true story of Malala Yousafzai, the girl who was shot by Taliban. The famous girl from the valley of Swat in Pakistan, who rose to worldwide fame when she was attacked by Taliban on her way to home from school, narrates her story with utmost compassion and candidness. The book is co-written by Christina Lamb, a British journalist who is currently working as a foreign correspondent for the Sunday Times.

I am Malala is based on the journey of Malala from the beautiful serene valley of Swat in Pakistan to the floor of one of the world’s most celebrated organization, The United Nations. I would not delve into the intricacies of her life, for that is for the readers to find out. But I would definitely talk about the book’s positives and negatives. On the positive side, the book is written in the breeziest style possible. For readers, who have never ever been much aware of the conditions in Pakistan (especially areas like Swat which have been under the brutal control of Taliban for years now), the book definitely guides the readers through.

The sprinkling of a little bit of historical and political background in between the anecdotes makes for an interesting and informational read. The parts where Malala beautifully describes her life in Swat, particularly her emotions, her people, her pastimes (including reading Stephenie Meyer’s bestselling series The Twilight Saga) and others are unquestionably the most interesting ones. At many times, you will be surprised with the kind of courage this little girl shows in the face of adversaries which are thrown down her way.

On a much deeper level, this book also makes you realize how tough life is for many fellow humans, and how many things in life we take for granted. We are always lusting after things which we do not have, but then, there are so many people all over the world, who are deprived of the very basic needs. What we dismiss as necessities, for many are luxuries. Moving on to other tit-bits, the book seems to be a candid revelation about many things which are inherently wrong in Pakistan and more so in Taliban controlled Pakistan.

Moving onto a few not so positive aspects of the book, I would like to mention that there were many times, when I thought and truly believed that the narratives were much exaggerated. The negatives too much sensationalized and positives too much boasted of, maybe it is one effect of taking in a foreign co-writer, who definitely sees things from a different perspective, a perspective one which has been brain-wired into many subconscious minds all over the world.

Overall, a great read, I recommend I am Malala to one all, and not just because it was one of the most read books of 2013, but because every bit of feelings that goes into it’s shaping is definitely worth a read. A four and a half stars are, therefore, my final verdict on this amazing piece of non-fiction.

Book Review I am Malala Malala Yousafzai
by Sankalpita
Leave a Comment
Prev: There Was No One At The Bus Stop | Sirshendu Mukhopadhyay | Book Review
Next: The Exorcism of Sathish Kumar, MBA | Ramiah Ariya | Book Review