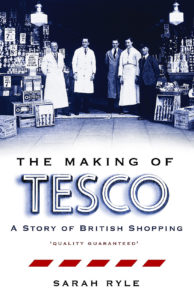 We all love shopping. We all love the way so many retail outlets are now giving us the shopping experience that we all have always wanted. We enjoy a wide array of choices and unbeatable prices.

So what was shopping like, 50 years ago? Who changed the way we used to shop in yesteryears? Who were the major retailers and what were they like?

Tesco is one such company, which has evolved dramatically over the past century and has been a major contributor to the way today’s consumers’ shop.

It is a company which, now in 2013, has become a local name in the global marketplace.

The Making of Tesco – A Story of British Shopping beautifully describes Tesco’s journey since 1919.

It tells us the enchanting tale of how, a one man’s street market stall in 1919, transformed itself into a globally indispensable company of the new century.

Like any company which has managed to survive over such a long period of time, Tesco has had its own share of woes and struggles. Sometimes it was luck, and sometimes it was the vision of the management which enabled it to survive the test of time and emerge as a winner.

From Jack Kohen to Hyman Kreitman to Leslie Porter to Ian MacLaurin to Terry Leahy and Philip Clarke, the book talks about the visionary men behind Tesco’s success and about how, each one of them individually, contributed to its success.

It talks about the phases of birth, growth and maturity which every company goes through, and how these phases fared for Tesco.

The Making of Tesco is based on various interviews conducted by the author with the who’s who of today’s and yesteryears’ Tesco.

This way of investigative journalism renders a social touch and personifies the organisation.

I liked the initial chapters – deep in history, with the military-like administration of Jack Cohen – and was truly surprised to know that Tesco was once a chain where no parents or grandparents would want their family to work.

That the company’s head-to-be-in-the-long-run were many such people who were embarrassed and lied about their working at Tesco.

Then came the chapters which detailed the transformation of once sub-standard Tesco to the miracle it is today.

Also interesting was the part where Tesco’s international adventures in Hungary, France, China, Taiwan, Korea, Thailand and the United States were described in vivid detail.

The only thing which was a little boring for me, and which frequently confused me, was the constant references to British towns, markets and areas, of which I have no or little knowledge.

Had I been an ardent student of British geography, like the way I am of its American counterpart, I wouldn’t have felt so hopeless.

That being said, I believe the book is indispensable to any student of management, particularly of strategy and marketing, for it imparts immense knowledge in practical areas.

Also, for anybody who is even remotely related to retail, The Making of Tesco is an indispensable one.