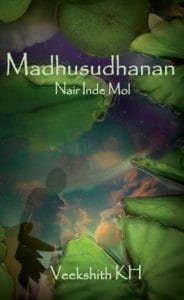 Debutant author Veekshith indiscriminately tugs at hearts with his pensive literary talents in this coming of age novel Madhusudhanan Nair Inde Mol. Centred around Madhusudhanan’s daughter who is on the threshold of adulthood after having completed her engineering degree finds herself locked up in a set of dilemmas about career, love and life. Little does she know that a visit to her ancestral home in Pandalam and the few days spent with her grandmother will lead to the clarity and courage to take on some life-changing decisions.

The narrative constantly moves between the past and the present from reminiscences of times spent with childhood playmates and hostel days spent with college friends to her present speculations about wanting to make the right decisions and feel confident in her life. Nostalgia abounds throughout the work as she recalls the innocent days of childhood spent with her brother in the Pandalam house listening intently to the numerous splendid stories from grandma’s bounty. As a Mumbaikar who only made the move to Kerala while studying at college, she is like every modern girl of her times- fretting about the future, wanting to fulfil her dreams and remain independent yet in touch with her family and her traditions. After all, she’s a Nair who’s well aware of her rich heritage. Midnight musings with her friend Sukriti give her the idea of building a ‘cartograph of the warehouse’ which becomes metaphoric of a map about her life so far.

From here begins the wide-ranging accounts of childhood, womanhood and her entry into adulthood. The imagery is vivid and rustic echoing the countryside that is opulently tantalising about ‘God’s own country’. Pandalam is nothing like a metropolitan city and is free from the din and bustle of city life. The temple becomes the place of community gathering and interaction. It is the glory of the temple that holds the heart and hearth of the town together. The smell of jasmine, the oil candles, the little girls performing Mohinyattam in the temple yard and the tasty feast on the banana leaf after the ceremony, add to the ambience of humility that is persistent throughout the work. Typical of Malayalees as also of their Bengali counterparts, the Leftist leanings proliferate a love for the motherland that is also present in hearts of Malayalees who have not even grown up in Kerala and, hence, draws them into its captivating essence.

Veekshith quotes Tagore while Madhusudhanan’s daughter indulges in some charismatic lines from Basheer ikka. Kerala being a part of a predominantly agrarian economy, the true abode of God is in the heart of the farmer and the peasant. The story flows with a moderate and easy going pace while the main focus is more on being able to intensely point out every minute detail that adds to the larger picture.

Hidden in the intricately woven folds of the crisply ironed fabric of Kanchivaram sarees lie secrets regarding home remedies, the art of living and what men like. Meeting one such woman takes Madhusudhanan’s daughter face to face with the realities of marriage as an institution that not only brings two people together but also two remotely related families. Her mother’s friend Anjali makes some startling revelations that create a long-lasting impact on her young mind. Though there are a few moments of epiphany scattered throughout the narrative, there are no grave life-changing revelations or serious climaxes. It is the bond between the grandmother and grand-daughter that is the central concern of the story and while the generation gap remains, there is a mutual effort on both the sides to create a holistic relationship despite occasional tiffs. It is Ammumma who introduces the term ‘universal conspiracy’ that refers to the right things falling into the right place at the right time. The universe conspires to makes things happen. It is a confusing thought for a young girl but she tries hard to grasp it.

Anna, Sukriti, Shahana, photographer Balachander and other characters are well drawn by means of their dialogues and the ideas they stand for. They are all characters who help the protagonist in her path of self- development and she thanks them later on by writing to each of them handwritten letters. Her sense of maturation is only reaffirmed by the old man who meets her on her departure from Pandalam with whom she feels some sort of connection that she’s unable to identify.

Youth and senility are beautifully reconciled in the course of self- realisation. It is only in the final chapter that the reader learns her real name- Meenakshi which marks the crowning moment of her growth. She is no longer Madhusudhanan’s little daughter but has evolved into an independent woman who has dared to leave her engineering profession to follow her dream of being an editor. The depiction of the process of bonding is heartwarming, to say the least.

Veekshith’s expressions are too simplistic and he is not a player of the language. At times the writing may come across as modest but childish. Yet, it is this simplicity that upholds the earthy scent which mixes with the avial, kadala, puttu and sambhar and lingers on the fingertips as if the reader can almost taste it.  His vision is clear no matter how muddled up the protagonist is and the book is a very genuine representation of Malayalee countryside culture which is equally represented through the book cover with imprints of the lush green Kerala backwaters.