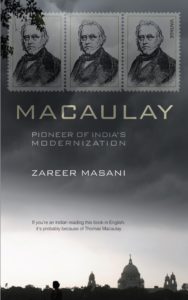 “If you’re an Indian reading this book in English, it’s probably because of Thomas Macaulay.” Now, how’s that for a blurb? Would you be able to ignore the book on whose cover this statement is written? Probably not; so couldn’t I. In the list of books, for reviewing, given to me by Random House, this was my first choice. And an amazing read it is. Whether for knowledge or for fun, you can blindly pick this book up – the biography of “Thomas Macaulay” written by Zareer Masani – and be amazed.

Thomas Macaulay was one of the most powerful and towering figures in 19th century England. He was a politician, a cabinet member, a secretary of war, a lawyer, an abolitionist, a writer, a reviewer, a historian, a poet, a reformer and a free thinker. Zareer Masani hails Macaulay as the “pioneer of India’s modernization” and it is true. It is to him that we, Indians, owe the Indian Penal Code, the Civil Services and most importantly, the spread of English language in our country and the world. In this book, the author has written right from Macaulay’s birth, his entry into the public arena, his rise to power, his posting in India, his reaching the pinnacle of England’s politics, his successful career as an author, until his death. While in India, Macaulay was the Law Member and had single-handedly written the Indian Penal Code; he was the president of the Committee on Public Instruction and the “Education Minute”, which he had written, resulted in the introduction of English in India; he played a monumental role in the Charter Act which led to the beginning of the Indian Civil Service. Besides these achievements, the author has also written some negative and personal things about Macaulay, like his hatred for India and everything Indian, his love for his sisters, his love for money, his neglect of his constituency, etc. The rest of the book too, is a wealth of information about Macaulay’s life, his contemporaries, 19thcentury Europe & India and many similar things.

The research done for this book is very detailed and flawless. Many quotes from Macaulay’s personal diary have been included in the book. The author has written not only about his own view on Macaulay but also that of his family’s, his contemporaries’, the Queen’s etc. His visits to different countries have been explained in great detail. The writing style is very coherent and simple, making the book a very easy read. I am not very sure if everybody would find it a single-sitting-read because of too much information, but even with short breaks in between chapters, I could finish it off in no time.

I love to read history with pictures & photos and because of the lack of these in the book, I have cut off 1 point in the entertainment quotient. Rest assured, pick up this book and pay homage to the man without whom our site probably would have been in a vernacular language.