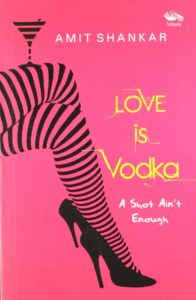 Love is Vodka is a book written by Amit Shankar which talks about the journey of a teenage girl Moon. The book is written in a breezy style describing the life of the young teenager and her subsequent adventures with guys, career and life.  Moon Ami was born to an Indian mother and a French father, who soon abandoned the duo to go back to take care of his ailing wife in France.

Since then, she has been single-handedly taken take care of by her ambitious television news anchor mother. Because of her mother’s ambitions and hectic work life, she often feels neglected and misses her father, who, though has always been in contact with her ever since via phone and internet, yet has never met her in person. When she is nineteen her mother pursues her to take an internship in an advertising firm and it is here that her story begins.

The story of Love is Vodka is a bag of missed emotions with all the highs and lows of a girl’s life beautifully portrayed by the author. But what surprised me most was the way the male author has written and narrated the story of a young girl so well. At no point you would feel that the story is not written by the fairer sex. After reading for a while, I found myself googling Amit Shankar, just to establish his masculinity. Now that you frequently come across girls with conventionally male names like Pradeep, Swapnil, Anmol etc, I thought “Amit” may be a similar addition to the bandwagon. But, to my amazement I found out that he was indeed a male author who has done such a brilliant job bringing out the character of a young girl with her own share of love issues and insecurities.

Love is Vodka has a number of positives. I liked the character of Moon; she is a lively girl who is not afraid to experiment and try new things, she is not buckled down by society’s or people’s expectations and lives life to its fullest. Her journey to fame is an inspiring one and makes you believe in the idea of “believing in yourself”. The language is simple and the style is breezy. I also liked the character of her Mom’s suave ex-boyfriend – “The Devil”. He seemed an intriguing person right from the start and his character was duly given his fair share of space in Moon’s story. He was indeed a very interesting person to read about. This book is chick-lit but it takes this genre to a new level with the brand new political angle and twist and thus makes a god effort at differentiation within the genre.

Love is Vodka  has also its share of lows and the most important one is the lack of a strong plot. The book would have been a better read with a presence of a well-thought plot rather than a sort of journal which it actually appears to be. A lot many authors are following this trend recently and I must say that it doesn’t leave me much impressed. Another major disappointment to me was the climax, though unpredictable it leaves you wondering “Now where did that come from?” It hits you in the face and tells you to accept it no matter what. All I knew about was Moon’s physical craving about the guy, but when and where did the love come from? I sincerely believe, given a little depth and space, the emotions would have come out beautifully and realistically and the novel would surely have been a better one. In the end, I will wait for the author’s next novel and wish him all the best for all his future work.