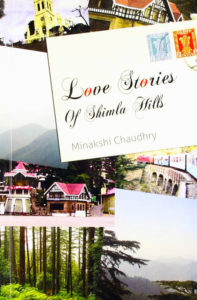 It has been more than 8 months since the first time my eyes witnessed the beauty of the majestic city of Shimla. Ever since Shimla has never failed to be out of my mind. Since then, I have bought 5 books on Shimla and read 3 of them. Love Stories of Shimla Hills is my third one and this book is a collection of love stories of people in and around Shimla and love stories of people whose hearts, cupid struck when they were in Shimla. The stories are narrated in a chronological order with the earliest dating to as long back as the 17th century while the recent most occurring in as late as 2010. Though each story is unique and different in its own way, all the stories seem to be bound together by a distinct chord.

Many stories correspond to the period of the British Raj in India when Shimla was the summer capital of the British India. Few of these are about or involve famous personalities like Jawaharlal Nehru, Lady Edwina Mountbatten (the wife of the first Viceroy of India – Lord Mountbatten), Lady Curzon (Lord Curzon’s wife), Maharaja Jagatjit Singh (the then Raja of Kapurthala), Maharaja Rajinder Singh of Patiala, Raja of Dholpur, Princess Brinda of Jubbal, the effervescent and enigmatic lady Amrita Sher-Gil, famous yesteryear actress Sadhna (of the Sadhna cut fame). A few others are about local folklores and local residents.

Among all the chapters, my favourite was the one on Princess Brinda of Jubbal and the one on Scandal Point. I also liked the one about the ghost of the local lady, who had fallen in love with the British babu. Though the chapters are not love stories in the truest sense, yet they have a connotation of love in a deeper sense. Most of them can be dubbed as scandals materialising out of matters of the heart. Thus, in that sense, the title is almost confusing, if not misleading. But, nonetheless, that does not make the book any less interesting to read.

A few stories are quite interesting, whereas a few others, seem just the opposite. Some of them give the impression that they were included just for the sake of increasing the number of pages. The book definitely does not rise up to the expectations set up by “Ghost Stories of Shimla Hills” and “More ghost stories of Shimla hills”, the two other books on Shimla penned down by the same author. I sincerely hope that if a sequel follows this one, it would be not as disorganised as this one (this one seems like a job done in haste).

All in all, Love Stories of Shimla Hills is an okay read and I would recommend it to people who have a specific interest in reading about the history of places and people related to those places.

Was this review helpful to you? Do let us know by dropping a line below.