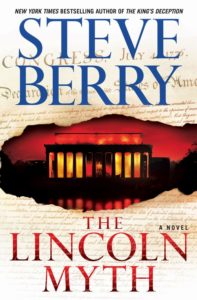 Historical fiction is a lot of fun to read, especially when it is from authors who do their research and try to keep the historical facts as straight as they can.

When they do play hard and fast with facts, it would be nice to know how much of it is true and how much is fiction.

When authors give you notes at the end to understand these aspects, it makes for a very liberating read as you don’t have to worry about whether you should believe the plot or not.

You can simply power through and then figure out later the fact and fiction of it.

Steve Berry is especially adept at this form of writing and his Cotton Malone series is a particular hit.

The latest in the series is The Lincoln Myth, which deals with the secession issue of the United States and the civil war.

While the Southern states are threatening to cede away, and his commander John Fermont refusing to follow his orders, President Abraham Lincoln receives a letter from his predecessor that shocks him.

In the present day, Cotton Malone once again finds himself in the midst of the Magellan Billet business as a small favour soon sees him getting involved in a Justice Department mission to stop enemies that are trying to destroy the United States of America with the help of a secret that died with Abraham Lincoln.

Almost all of Steve Berry’s books involve a heavy dose of history combined with some fast-paced action, making it the perfect mix.

It is the same in the case of The Lincoln Myth as well. However, this time Malone seems to have a much lesser role to play than in previous adventures, with Luke Daniels and Stephanie Nelle having a bigger role to play.

However, it is a Cotton Malone adventure and he once again teams up with Cassiopeia to stop the bad guys.

Steve Berry’s books are written after extensive research, and it’s the same with this book as well.

The Lincoln Myth will give you a bit of interesting historical background, especially if you are not too aware of the Civil War, but don’t forget to read the Writer’s Notes and do your own research if you want completely accurate information.

If you are simply looking for a fast-paced adventure, then you will not be disappointed either.