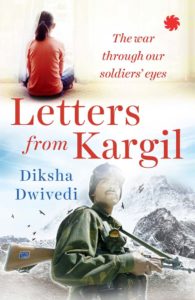 “In May 1999, India was invaded by Pakistan in Kargil in the Ladakh region in a surprise attack. Diksha Dwivedi’s father was one of the martyrs of that war.”

Letters from Kargil: The War Through Our Soldier’s Eyes is that heart-warming story of the Kargil war that had until now remained unknown. In this book, Diksha Dwivedi, who lost her father Major Chandra Bhushan Dwivedi in the fateful Kargil war, brings together the untold memories of our heroes. For this book, she diligently contacted the families of these heroes of the Kargil War and asked them to share any letters that they had received from them during the course of the war.

The result was this beautiful book that familiarizes the reader with our soldiers in a way no other book can. This is because a major portion of Letters from Kargil is in the form of these compiled letters written straight from a soldier’s heart.

The book starts with a little introduction on the war. It mentions how the war started, how clueless our military was with regard to an imminent infiltration, and how shocked our soldiers were on learning about the extent of the infiltration. The reader also finds Diksha reliving fond memories of her dad and remembering her last memories of him.

The best thing about Letters from Kargil is its subject. It is such a touching one that it is almost impossible not to cry. The reader gets to experience the war through a soldier’s eyes and that is something which makes this book a unique read. The book is written in an easy and simple language and can be read in a span of 3 to 4 hours.

Letters from Kargil is a quick and light non-fiction which should be read by every Indian to salute the memory of our brave soldiers. There are numerous accounts of exceptional bravery and leadership shown by our men in uniform which made the impossible possible. At the start of the war, the situation was unfavourably biased towards the Pakistan army; they had hold of all the major points and peaks. But it was only through unwavering courage and patriotism that even the unattainable peaks were captured and won.

The letters included in Letters from Kargil mention the pain of separation, the challenges which our soldiers faced in their own words. They wrote to their mothers, to their fathers, to their brothers & sisters, loved ones, children and friends and in all letters, they told their family not to worry often assuring them of their safety.

Overall, the book is a delightful read and a must read for every Indian. My issue with Letters from Kargil was that it ended too soon. I would have loved if the book had a hundred more pages. I end this review by rating the book 4 stars out of 5.

Can’t wait to read it? Buy your copy of Letters from Kargil from the link below.