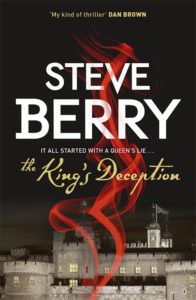 For an author, it is not enough to have a good story to tell. It is also important to make sure that the right amounts of suspense are interspersed in the narration to keep the reader interested throughout.

To do this successfully, the author needs to keep giving enough tidbits throughout the novel so that the reader has the curiosity to get to the end of the book and find out what the entire story is about.

And the number of authors who can do that are very few.

Steve Berry is one of those authors who have the ability to ensure that his stories remain filled with suspense.

When you pick up a Steve Berry novel, you not only get to enjoy the story but also get to know a lot of history too.

Having read most of his other books, it was with a lot of anticipation that I started reading The King’s Deception. And I was not disappointed.

Once again, Steve Berry was able to use a piece of history to become meaningful in the present-day world, so much so that people are willing to kill each other for this secret from the past.

The King’s Deception is about a CIA operation that is taking place on British soil, without their knowledge, or at least that’s what the Americans believe.

With Scotland looking to release a terrorist back to his home country on grounds of humanity, the Americans are surprised that England is not putting political pressure on the Scots to stop the transfer.

The CIA, assuming that England must be getting something in return, look for alternatives with which to make England do its bidding.

Blake Antrim, a CIA operative, comes across a long-hidden secret, one that, even after hundreds of years, was sure to embarrass the English, enough to make them stop the transfer of the terrorist.

Cotton Malone is once again Steve Berry’s main man, and the story revolves around how the secret is revealed, and the magnitude of its significance. Cotton has to deal with his son being kept away from him as well as trying to figure out who he can trust.

Though he has his former boss to fall back on, even she doesn’t have full knowledge of what the CIA is up to. What follows is another thriller that is unputdownable, in every sense of the word.

Steve Berry has an excellent grasp on the art of spinning a modern-day thriller around centuries-old history, and once again he does not fail.

The piece of history that he chooses this time is brilliant in its shock value, and by the end of The King’s Deception, you would in fact wonder if that is not what really happened.

Also, the economy in the characters is evident as none of them is redundant to the plotline. There are no loose ends, and as is always the case, the writer’s note at the end differentiates fact from fiction, thus giving you a wonderful history lesson.