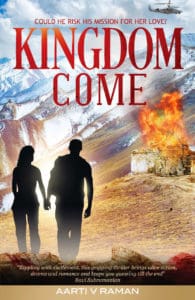 Spy thrillers are one of the best genres to read. If well executed, they have all the elements that make a successful book – a solid and tense plot, formidable protagonists, noxious villains, gut-wrenching fight sequences and a shocking climax. Add a steamy love story to this and the book becomes a bestseller. Aarti V Raman’s “Kingdom Come”, published by Harlequin, famous for their “Mills & Boon” imprint, promises to deliver all of the above. It is the story of a master spy, Krivi, who falls in love with his assignment, Ziya.

Spies are generally expected to be ruthless, heartless and devoid of any emotions to succeed in their line of work, and Krivi Iyer, ex-MI5, has all these in abundance. He is as stony as they come. His nemesis is ‘The Woodpecker’, a terrorist who kills for pleasure, and whose identity is known to none. The hunt for The Woodpecker brings Krivi to Kashmir, to Goonj Business Enterprises, managed by the beautiful Ziya Maarten, alleged to be The Woodpecker’s sister. They fall in love and as with all love stories, they break-up owing to the circumstances. But when The Woodpecker strikes again and tears Ziya’s life apart, killing her dearest friends, she is forced to seek Krivi’s help to seek vengeance. What follows next, and how Krivi and Ziya seek retribution, forms the rest of the story.

“She wanted to kick him, just go to town on his face and punch the crap out of him. But she knew, oh, she knew, it was exactly the kind of response he was looking for. Master spy that he was. First would come anger, then would come grief, and then he would console her and cajole her and she would end up right wherever he wanted her.”

“Kingdom Come” is more of a romantic thriller than a spy thriller. The heart of the story is not Krivi’s bravado or his machismo or his superhuman abilities to track down baddies, but Krivi’s and Ziya’s passionate love story. The story of the book is built upon their chemistry. Aarti’s language is crisp, and the flawless editing makes the reading easier. The narration style though is something which put me off at times – I like the characters in a book to converse, to participate in a dialogue. The narration style of “Kingdom Come” is more focused on passive description than active interaction. But in spite of being a newbie author, Aarti has done a tremendous job of portraying the raw emotions which her characters feel – love, lust, anger, grief. In conclusion, the plot, the characters, the zealous love story, and the intense emotions are well worth a try and if you are a fan of romance fictions, “Kingdom Come” shouldn’t be missed.

Which is your favourite spy thriller/romance thriller? Do let us know in the comments below.