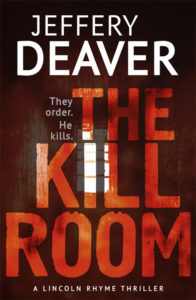 What is the most important thing you look for in a thriller or action novel? My first pick is always the protagonist. I tend to judge thriller novels depending on the characterisation of the hero. The next in the list are a fast plot, a powerful adversary and an electrifying climax; in that order. The novels of Lee Child and John Grisham have all these elements in right proportions. Matthew Reilly tends to overdo a bit.

Before I received ‘The Kill Room’ from Hachette, I had heard about neither Jeffery Deaver, the author nor Lincoln Rhyme, the protagonist, though this is the 10th book in the Lincoln Rhyme series. Being an ardent thriller fan, I am always on the lookout for new authors or series, and after reading ‘The Kill Room’, I have made up my mind to read the previous nine ones too.

On 9th May, Robert Moreno, an American who is a vocal protestor against America, is killed in the Bahamas. He is shot by a sniper 2000 yards away. This brings Lincoln Rhyme, an expert crime scene investigator, onto the case; he is helped by NYPD officer Amelia Sachs. But cracking this case is not easy to Rhyme because the crime scene and the evidence are in the Bahamas, and Rhyme is a quadriplegic strapped to a wheelchair. He must solve a crime committed 1500 miles away, using the only functioning part of his body – his brain, and that too within 10 days because the next hit will be on 19th May. Besides, the people who are key pieces of this puzzle are being murdered one-by-one by an unknown assailant.

Why was Moreno murdered?
Who is the next victim?
Is any government agency behind these killings?
Will Rhyme deliver this time too?

Though this is my first novel in the Lincoln Rhyme series, I could well appreciate the story, the writing style and Rhyme’s character. The difficulties generally faced, when not reading a series chronologically, was not evident. Rhyme is a scientist who consults for the NYPD. He is a crime scene specialist and the clues he draws by just looking at trivial things like clothes and photographs, are fantastic indeed; reminded me of the ‘Sherlock’ series. The other characters too are worthy of this excellent plot. I particularly enjoyed the character of the serial killer and his obsession with cooking.

Deaver might not have a superior writing style but he totally makes up for it with his control over the plot. The story is fast, exciting and never boring, not even a page. The quote, ‘I started reading a new book and 10 hours later realised that I had not eaten or gone to the bathroom’, was created for books like this.