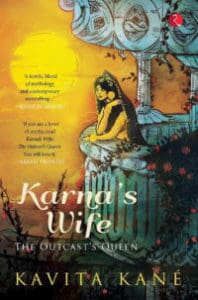 Women have, to a greater extent, been ignored in Indian mythologies. Barring a few exceptions, women find scant mentions in both Ramayana and Mahabharata.

For instance – we venerate Lakshmana and his dedication towards his brother but are unfamiliar with the fact that his wife, Urmila, slept the entire 14 years of his exile so that he could stay awake.

We have vilified Ravana and his entire family but are ignorant of his wife Mandodari’s piousness and the key role she played in protecting Sita.

That is what Kavita Kané has attempted to correct in her book, Karna’s Wife – The Outcast’s Queen by narrating the story of Uruvi, Karna’s fictional wife.

Uruvi’s story begins with an archery contest where Karna, a charioteer’s son, openly challenges Arjun and is in turn ridiculed for his low birth.

Enamoured by his charms and godly beauty, she falls in love with him, and in spite of the social humiliation, marries him.

Her story runs parallel to the events of the Mahabharata. How each of those events shapes her and her peaceful life, forms the gist of Kavita’s book.

When Karna’s unflinching loyalty to Duryodhana leads him towards the path of destruction, she tries to persuade him, unsuccessfully. When Draupadi is tarnished in the royal court by Kauravas, she acts as Karna’s conscience-keeper and leaves him.

When it becomes evident that the Great War would lead to Karna’s death, she tries to dissuade him from participating. Many such episodes which directly affect her, but on which she has no control over, are beautifully narrated.

‘Karna, each day I live in the fear that I shall lose you…’ she whispered brokenly. ‘You will lose me only through death, Uruvi,’ he added calmly, drawing her close. ‘Through nothing and nobody else!’

In Karna’s Wife, the way in which Uruvi’s story is blended with Mahabharata is remarkable. Kavita has done a laudable job in bringing out the emotions of a wife who, despite knowing the future of her husband, is helpless.

The story of Mahabharat has not been explained in great detail but though this book is a work of fiction, the author has maintained the structure of the great epic intact.

At times the plot unfolds at a very slow pace and becomes boring, but one must remember that the emotions of an upset woman are rather knotty, and narrating it is not an easy job.

I have always been an admirer of Karna’s character; he has been an embodiment of valour, virtues and true friendship. They say that behind every successful man there is a woman.