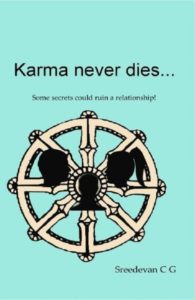 “A man is born alone and dies alone; and he experiences the good and the bad consequences of his karma alone; and he goes alone to hell or the supreme abode” – Chanakya

People say Karma has no menu, you get what you deserve and I believe most of it to be true for Karma always finds its way back to you no matter what or where you are. The title of the book – Karma Never Dies also reflects the same thought and highlights the karmic equations that shape a man’s life.

The story is of a young Keralite who was born and brought up in the happening city of Chandigarh. Though in his youth years his family moves back to Kerala, but he decides to follow his heart and come back to the city he has grown up loving so much. He soon finds a job at a Retail Outlet which was one of the many companies which sprang up as a result of the retail boom in India. This book explores the protagonist’s various relationship dynamics at his workplace which affects and changes his life for bad and sometimes also for good. As he keeps meeting new girls, befriending them, falling for some and really caring for some, he develops as an individual and learns that not everything is what is seems like.

Though a small note in the blurb claims otherwise, the story seems to draw inspiration from real life characters or instances and that is what makes the most of the book. The plot of Karma Never Dies is literally non-existent, as the story has a rather diary like appeal and approach to it. It is both good and bad. Good because it makes the connection with the reader easy and bad because the lack of plot often calls for a very strong compensation in terms of characters and other deliverables, most of which are very tough to achieve.

The writing style of the author is breezy with most of the text being in the form of conversations. This combined with the fact that the book is only a hundred and fifty one pages makes it a rather easy read and one which the reader can easily finish in a single sitting. This type of writing style often comes with a challenge as the heavy use of conversational texts often seem to reduce the literary value of the book. The same also holds true for this book. The chapters though holding attention will not add much literary value to those reading it.

The characters are decent and well developed and will grab your attention. They at many points of time do a very good job of reflecting the true state of mind of people in a relationship. The confusion, the chaos, and the insecurities are nicely captured and delivered and not tampered with as is the case with most books these days which hugely focus on only the best (read superficial) aspects about being in a relationship.

That being said, I rate Karma Never Dies two and a half stars and would wish the author a very best for all his present and future works.