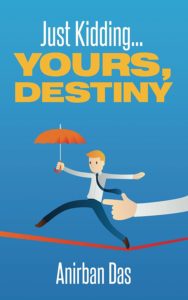 The greatest prankster in the world is destiny or fate or karma. It always teases us, and never lets anything go according to plan; it is the greatest devotee of Murphy’s Law. When things seem to be going smooth and comfortably, destiny gets bored and takes its fun on us. It has a strange way of behaving – courteous at times, sadist at other times, and altogether indifferent sometimes. But the sure thing is that it never leaves us, it is our constant companion like a shadow under the sun, like the ‘hutch dog’; we cannot just wish it away. Anirban Das’s Just Kidding… Yours, Destiny is a humorous take on the strange ways and behaviour of destiny.

“There was a group of 50 autorickshaw drivers dancing to tunes of a solitary taxi driver. They seemed to be aping the taxi driver and following his every move. Little wonder that it was so difficult to hail an auto or a taxi in the city, when all of them were busy dancing. Not just that, the traffic cops had joined in the melee too.”

Kunal Roy is living the Indian dream; the Head of Sales at a realty firm, HomeMakers, he owns a flat in Mumbai, earns good money, and drives a Mercedes. But fate has surprises in store for Kunal when his company is acquired by a bigger firm, the MPD group. His new boss, Harry, hates his guts, and assigns him the toughest assignments; he falls in love with an intern, Shristi, 10 years younger to him, which is sure to change his life in an unimaginable way. When the Panvel project under him seems to go nowhere, due to the involvement of local politicians and villagers, he is threatened with suspension, and has to employ unconventional means to see that things fall in place.

Besides, there is the difficulty of wooing Shristi and marrying her. Narrated in first person by Kunal, we get to know about his marriage, and subsequent divorce, with Sarika. Even after all of this, Kunal is still comfortably happy. Not content with what it has done till now, destiny ups its ante and decides to pass Kunal through more difficult times. What more does Kunal has to face? Will Harry be able to get to him? Will he get married to Shristi? Or will destiny win over him?

Though the subject of the book is a serious one – destiny playing its pranks in Kunal’s life, Anirban has created a humorous story out of it. Kunal’s meeting up with suitable girls at the insistence of his parents is surely gonna make you go bonkers. His witty dealings with Nadkarni, the local politician, is waggish and amused me to no end. His connection with Harry is nothing but comical.

No character is grim in the book; they all tickle you and make you chuckle. Though the language has leanings towards the vernacular, it ends up adding more fun to the already funny story.

This book will surely make you laugh until your stomach aches. So read it at your own risk. I will surely read it again.

Anirban Das Book Review Just Kidding Yours Destiny
by Ravi
Leave a Comment
Prev: The Restaurant at the End of the Universe | Douglas Adams | Book Review
Next: The Song of King Gesar | Alai | Book Review