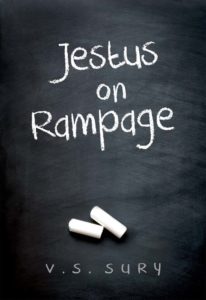 While watching the movie M.S.Dhoni, a dialogue struck my mind, which I think is applicable here. It goes like this “Does he lack technique? Or is he unconventional?”

The story of Bagus Baglochus Bagenborg brought the same question to my mind. Is he eccentric or unconventional?

“Jestus on Rampage” starts with the introduction of the eccentric professor Bagdenborg, a new professor in the Next Generation University NGU.

The professor becomes the talk of the University with his unconventional teaching styles and thought process. He introduces the term non-logic to the students, stating that logic doesn’t stand a chance before non-logic.

His predictions become miraculously true to the wonder of the students and chagrin of the teachers. Discussions spurt out to analyse whether he is unconventionally brilliant or extraordinarily imbecile.

Is the professor a magician or a lucky fool? The students and the teachers surreptitiously set out for investigating the truth, when they come across the name Jestus.

Unable to find the real answer, the management fires him, only to get back another creature.

The second part of the story shows us how a group of men stalk him to finding something as eccentric as Jestus himself.

The entertainment quotient drops drastically in the second part since it is more or less an extension of the first part. The climax too was predictable and cliché.

The story of an eccentric professor cannot be considered as a novelty since we have seen similar characters in movies and books before. But the scientific explanations given by the professor attracts the interest of the readers.

The thoughts like the concept of comparing hydrogen with the earth and the moon are surprising and brilliant. The professor is addressed by different names throughout the story, which creates confusion in the readers.

Some of the comic indulgences did not incite the intended laughter. After a point, the professor’s demeanour becomes boring and too dragging.

Well once the point is made that the professor is different, eccentric, unpredictable and mysterious, the story should have proceeded from there.

The author succeeded in maintaining the intrigue about the magic happening during the Sukla Paksha (waxing moon) and thenceforth.

Throughout the book, I kept on thinking whether the book is a fantasy or is there any solid explanation for all the happenings. The curiosity is enough to hook the readers to the book.

Since the entertainment quotient goes on fluctuating, I would give “Jestus on Rampage” three and a half out of five stars.

(This review was done by our guest reviewer – Rakhi Jayashankar)