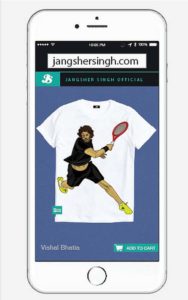 One statement to define the book Jangshersingh.com – The story starts with a bang and ends with a bang!

It is not every day that you come across a novel based on sports and if the sports in question is Tennis than what better way to start a Sunday than reading a novel revolving around tennis with a couch to laze on and a cup of coffee in hand.

So as you must have guessed, that is how my Sabbath day started and that is just how the next several hours rolled by, the tryst ending only when the pages of the novel did.

Jangshersingh.com is a story of India’s top-rated junior tennis player, a Punjabi by heart and nature, who one fine day was marvelling in the glory of teenage years by getting cosy with his girlfriend in the fields outside his sleepy ancestral hamlet.

What felt like a lucky day soon became an opposite one when the intimate couple was discovered by the girl’s not so cosy brothers and the boy was beaten until death.

Years later, the boy has recovered from the injuries and the trauma and now gains a wild card entry into a major Australian grand slam.

A wild card player who isn’t even ranked is not to be taken seriously but much to their dismay, the people of Australia will discover the man that is Jangsher Singh.

Singh knows that he is at the top of his game and his future is at stake in this event but little does he know that somewhere in Australia, the fate of two fellow Indians also depend on his performance. Their lives and their dear future now hang on the tournament’s outcome.

But who are these two? They are two idiosyncratic self-declared geeks from Sydney who land up in a tricky situation with the local mafia and to get out of which they need to pay a hefty sum of money.

After having lost all that they had, they now have a seemingly breakthrough idea; an idea whose success now hangs on the performance of Jangsher Singh in the tournament.

So do catch these two pseudo intellects and their tryst with the mafia and do catch the robust and arduous Jangsher Singh beating the hell out of top seed players in this enthralling and adventurous book today.

The best part of the book is the story and the backdrop.

After having read tens of romance novels with the same concept and almost the same storyline, this book sure came as a pleasant surprise.

Sports fiction is definitely a recommended genre and this book does endorse that fact. The writing style of the author is also noteworthy.

Equal doses of adventure, drama and thrill make the book a winner and then there is a little bit of emotional quotient too which makes for the icing on the cake.

I liked the characters a lot. It was really intriguing to read Jangsher Singh come alive in the matches and it was also fun to get to know Aman and Yug.

The climax though not entirely unpredictable had a little surprise element too.

The only drawback for me was the language, but I guess to retain the originality of theme it was required of the author to make use of the accented and adapted version of the English spoken by Indians in Australia.

But overall, Jangshersingh.com won my heart and I am sure it will win yours too. I, therefore, rate the book four and a half out of five stars and brand it as a “must-read” to all my readers.