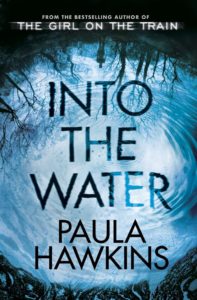 Having read the phenomenally successful book, “The Girl on the Train” by the same author, comparisons between the two books were inevitable. So, I started reading “Into the Water” keeping in mind my likeness for Hawkins’s previous book. This was not such a good idea because the book is remarkedly different from Hawkins’s first book and that probably is the only reason why I wasn’t much satisfied when I finished reading Into the Water.

“Into the Water” is the story of a small-town, Beckford, and the mystery which surrounds its waters. A few days before she dies, Nel Abbott had been calling her sister Jules urgently. Estranged as they were, Jules never bothered to answer her sister’s call. Now, Nel is dead and it is said that she committed suicide. Unwillingly, Jules is dragged back to the town Beckford and its mysterious waters. She is doing something which she promised herself to never do – going back to the Drowning Pool and to the evils that lurk in its waters.

She is afraid of Beckford, of the Mill House, of the river; but most importantly she is afraid of the Drowning Pool. She knows Nel would have never jumped, she was strong and loved life; she would never want it to end this way. But when it comes to the Pool, one can never know. For hundreds of years, it has taken enough lives to be considered unnatural. What is the secret of Nel’s death? What mysteries lie in the drowning pool? Is Jules safe? Read the novel to know more about this fascinating tale of power, darkness, hope and betrayal.

The plot of the book is a bit complicated and has a plethora of characters. The book is by no means a simple read and requires the reader to keep going back to the earlier chapters in order to make sense of what is happening. The story is intriguing and mysterious and the promise of an exciting unravelling will make you keep turning the pages even when your eyes are begging to be shut. The only thing which I did not enjoy that much was the huge cast of characters. They are just too many to keep track of and right until the middle of the book I was struggling to remember each one of them.

A few of the characters are an interesting bunch and they keep the story entertaining enough. I liked Paula’s writing style in the way it keeps the mystery alive right until the end. Her signature style of building up the intrigue was quite visible in Into the Water too. The narration is from multiple points of view. For example, in the case of Jules, the narrative voice is the first person. For a few others, it is from a third person point of view.

The climax was a little unflattering. I refrain from the details for the sake of giving away spoilers but it is safe to say that it was a bit disappointing. It simply did not do justice to the huge narrative build-up which preceded its unravelling. Also, I got an inkling of the end much before it was disclosed. But even though that was the case, the book overall is definitely a recommended read. I suggest that you should not buy and read it for the hype. It does not do justice to the hype that surrounds it. But if you can read it with a neutral mind (I could not do so and hence the suggestion), you will really enjoy what you read.

I rate the book four and a half stars in the entertainment quotient and will recommend it to lovers of mysteries and thrillers (slow thrillers) especially to people who enjoy psychological thrillers.